Near the end of the Ellsworth Panthers football season, senior running back Max Grand released the information that he will be attending the University of Minnesota in the fall of 2022 and will be continuing his football career as a preferred walk-on for P.J. Fleck’s Gophers program.

Grand broke the news on his Twitter account just days before Ellsworth’s sectional semi-final road playoff game against Northwestern, a game that the Panthers won 54-13. After that blowout victory to advance to the sectional final, Grand spoke about his decision to attend Minnesota.

“First of all, I just love the coaches,” Grand said. “P.J. Fleck is a great head coach and I just love his philosophy and how he operates. The atmosphere there, the diversity, everything about Minnesota is – I just loved it. I fell in love with it. I’m looking forward to going there.”

According to Heller, Grand changed significantly as a player between the time he got him in his first practice as a freshman and when he walked off the field in Madison for the final time as a senior.

“He went from being a boy to a man,” Heller said. “He definitely got a ton stronger; he probably trimmed a half-second off his 40 (yard dash time). He was fast as a freshman, but he was exceptionally fast as a junior and a senior. He was the only guy that started with the varsity as a freshman. Whenever you’re doing that with a high school kid, you’re dealing with a pretty special athlete.”

During his freshman and sophomore years playing for coach Heller and the Ellsworth football program, Grand was a special back, one of very few players to instantly be a varsity caliber player as a freshman and sophomore. However, according to Heller, something changed during Grand’s senior year and as he continued to get bigger, faster and stronger, he realized that Grand was destined to play on Saturdays.

“His last year for sure, I’m like, ‘This kid is going to play on Saturdays,’” Heller said. “I didn’t necessarily expect him to get a Division 1 look, there are so many variables with that, not saying he couldn’t, but you need a lot of stuff to work out your way for that. He did a nice job promoting himself and going to camps and making the most of every opportunity. Having a great track career didn’t hurt either. I appreciate him pushing the multi-sport athlete card. It was a great decision by Max (Grand) and I’m glad it paid off for him.”

Heller praised Grand’s offseason work ethic. He spoke about how Grand spent significant time in the weight room and continued to improve his game, even when he was already a dominant, dynamic running back. In doing so, he improved his game as he progressed through his high school career. Perhaps the most unsung hero that contributed to Grand’s fantastic senior season was the big, physical offensive line that he got to play behind. The offensive lines during his junior and senior seasons were experienced and talented, which helped him throughout both seasons. Heller spoke about Grand’s ability for growth at the next level.

During his senior season, which ended in the state championship game against Catholic Memorial, a game that the Panthers lost 21-12, Grand was a dynamic back that accumulated yards like very few others in Ellsworth history. Grand rushed for 1,634 yards, averaged nearly nine yards per carry, and had 17 rushing touchdowns for the season.

Grand’s talent out of the backfield was a driving force in the Panthers’ 12-1 record for the season, which was the team’s best showing since 1990 when they won their last state championship. Coach Heller spoke about how Grand’s game will translate to the Division 1 level.

“I do (think it will translate),” Heller said. “He’s a physical, fast kid. I’d like to see him put a few more pounds on and maybe get a little faster, but what coach doesn’t want to see that happen. There are lots of kids that make that jump from small-town football to the bright lights of Division 1, and I think Max (Grand) is one of the kids that can do that if he continues to be coachable and works hard during the offseason. I’m excited to see where his journey takes him.”

For as impactful as Grand has been on the field between the numbers for Ellsworth, he’s also been moving the needle for Heller’s program off of the field as a leader in the offseason.

“He’s the guy that is going to show up to the weight room and he’s going to be in there teaching the young guys how to lift correctly and motivating his teammates to lift harder,” Heller said. “A lot of times he’s the first guy in and the last guy out. He will be missed. He had an impact off the field as well as on it.”

While Grand’s on-the-field contributions only lasted his four years of high school, there is no telling how long his off-the-field contributions will last. He was one of several Ellsworth seniors who turned the program into one of the best in western Wisconsin. Without him, the magical 2021 postseason run likely doesn’t happen. Heller spoke about Grand’s impact.

“I can’t speak highly enough about Max (Grand) and his senior teammates,” Heller said. “Where they’ve taken this program, where they found it as freshman to where they’re leaving it after their senior season. To say it’s a footprint is a huge understatement. They’re leaving a huge gash and it’s a great gash to have. We will forever be grateful for those guys. We have a program that’s on the rise and hopefully, we can keep it going in the right direction as coaches.”

Ellsworth senior running back Max Grand breaks loose on a rushing attempt in a victory against the Amery Warriors on Friday, Oct. 15. Photo by Reagan Hoverman 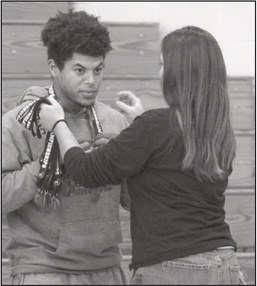