On Saturday, Dec. 4, Ellsworth, Prescott, Spring Valley/Elmwood, and seven other schools competed in the annual Ellsworth Invitational, which was won by Cadott with a total team score of 219 points.

“Landon (Lampman) wrestled very physically and aggressive versus his opponents,” Matzek said. “His opponents on Saturday couldn’t handle it. Landon also made an adjustment in his technique between the semis and final that helped him get that quick fall in the finals.”

Lampman wasn’t the only Ellsworth wrestler who made it to the finals in his respective weight bracket. Ivan Veenendall also made his way to the finals. To get there, Veenendall defeated Cole Steinmeyer of Spring Valley/Elmwood, Max Schmitt of Spring Valley/Elmwood and Treyton Thesing of Eyota to reach the championship match in the 160-pound weight bracket.

After defeating the three aforementioned wrestlers, Veenendall went into the championship match against Cole Pfeiffer of Cadott. Just under two minutes into the first period, Pfeiffer of Cadott gained a position on Veenendall and pinned him to win the 160-pound bracket. After the match, Matzek spoke about Veenendall’s performance.

“Ivan (Veenendall) made his first finals appearance in a varsity tournament,” Matzek said. “He has come a long way since last year. He put a lot of time in the weight room this offseason and he is reaping the rewards. He had a great come from behind win in the semis that was just pure grit.”

In addition to both Veenendall and Lampman, other Ellsworth wrestlers competed well. Matzek reflected on the annual Ellsworth tournament and what it meant to his team.

“The entire team wrestled hard in both the varsity and JV tournaments,” Matzek said. “Every competition is a benchmark leading up to the state tournament series. We get to see what we do well and what we need to improve on. I look forward to getting most of our varsity back on the mat this weekend when we compete in the Ron Edwards Duals in Prior Lake.”

The Prescott Cardinals wrestling team was also at the Ellsworth Invitational. The most notable result for Prescott was that of Nolan Thomley, who finished in fourth place in the 145-pound bracket after losing to Brock Folkema of Mora in the third-place match. Shane Butler of Prescott also took third place. Butler competed in the 170-pound bracket.

Overall, the first tournament of the season for the three local teams was a learning experience. All of them now have tape to study and get better on the wrestling mat. As the regular season gets into full swing, dual matches will be starting in the coming weeks. 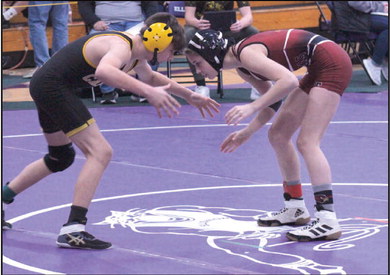 Haeli Casey of the Spring Valley/Elmwood wrestling team grapples with a Cadott wrestler during a match at the Ellsworth Invitational. Photo by Reagan H