Cooperation by three local entities in the Vil – lage of Boyd, Wisconsin will mean that young T-ball players should be better protected this coming year, as donations totaling $12,000 when pooled together have been provided by Northwestern Bank, Boyd Lions Club, and the Boyd Little League. Of the total funds raised, Northwestern Bank contributed $5,000, the Boyd Lions Club has donated $3,000, and the Boyd Little League has given $4,000. Donations will be used to build a field and safety fence on the former tennis court area at Lotz Park, adjacent to County Trunk D. The field is mostly done, while the fence is a work in progress. Boyd Village Clerk Sandi Isaacs and Deputy Clerk Jayne Geist gave some financial details of the ongoing sports project.

From a total projected cost of 18,881.72 for the field and fencing, $12,000 is taken care of through the donations, along with the use of a $586 grant for the project. The black dirt, drain tile, and sand to fill the drain tile on the field portion is mostly done and cost $5,881.72, while the cost of the fence come spring could fluctuate with steel prices, as Village Presi – dent Bob Geist made known.

"Right now we're basically in a holding pattern," Geist said of the project's progress and the winter snows. "Steel prices (for the fence) could come down in Spring. They could also go up." With shortage affecting the markets and things in flux, there's still work to do.

Speaking of which, a recent donation from the Travis Geist Memorial Tournament following the three above added anoth – er $1,214 to the funds raised towards completion. More on that donation and its reasoning will appear in a future issue of the newspaper.

T-ball season, meanwhile, is roughly six months out, sched – uled to start this summer, after school is out. Time then to work on the project.

"A HUGE Thank you to those who have & any future dona – tions towards this project by groups and/or individuals, all the generosity is greatly appreciated!" Jayne Geist shared. 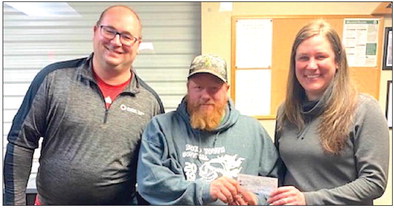