Tina Benson (left) keeps an eye on the ball as Lily Hoel moves in to assist Friday. Photo by Joseph Back.
News
Varsity girls fall to McDonnell at home

The Oriole girls met McDonnell at Stan – ley-Boyd Friday, with the result that the Orioles fell to the Lady Macks, 58 – 52. Orioles Coach Alison Becker shared some thoughts on the game Friday and what to work as a team on go – ing forward.

"We shot the ball very well in the first half and had a big drought of not making a field goal in the second half," Becker said of Friday. "That hurt us in the outcome of the game." As to the road moving forward, she said that the team needed to, "Continue to make three more defensive stops and two to three more scores offensively" to be in the win column, she said.

As to the better played first half for Stan – ley-Boyd, Oriole scoring started out with a three-pointer at around the 15 minute mark by Jessica Hazuga, following a pass by Tina Ben – son, who received the ball from a pass into the court by Kayte Licht following the ref's whistle.

Following the three-point shot, meanwhile, Leslie Derks was substituted for Benson, while a timeout with 12:08 remaining in the first half followed by some more points and a free throw by Derks brought the score 14-10 Orioles, grow – ing to 31-22 at the half, before unraveling in the second for a 58 – 52 finish.

The Oriole girls varsity plays next on Friday against Thorp at Thorp High.

Hamming it up at Stanley-Boyd 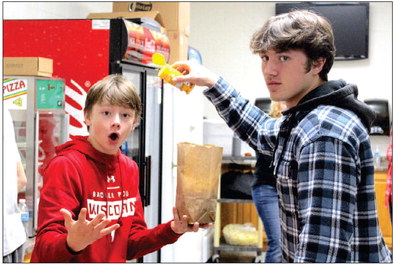 Haydn Gustafson (left) and Chase Sturm of the FBLA were among those helping out with concessions at the girls game against McDonnell Friday night. Photo by Joseph Back.