Due to debut officially as of December 21st with the Sol – stice, but apparently favoring an earlier surprise visit, winter touched down in the Stanley-Boyd area Sunday December 5. Calling in reinforcement overnight with a dusting of yet more white powder, the temperature Monday morning on the office barometer-thermometer placed outdoors read just below 20 de –

grees Fahrenheit and 29.81 millibars of pressure, inching slow – ly towards a "change" in the weather.

If you're a fan of snow, it's all good, and time to hits the ski trails and slopes. If you're not a fan of snow, on the other hand, there still might just be a consolation to come.

Set up earlier last month and opening officially with a cere – mony this Saturday December 11th from 4-5:00 p.m., the lights from Winter Wonderland" will dazzle visitors to the Chapman Park Campground from Friday December 10 (when first turned on) until January 2, 2022, from 4:30 to 10:00 p.m. every eve – ning. Area residents can drive or walk-through. Also included in the light display is a Memory Tree for those who can't be present in person Saturday but are present in thoughts.

"If you would like to have a bulb added to the special tree in memory of a loved one, it is not too late," National Honor So – ciety (NHS) Advisor and Stanley-Boyd teacher Polly Hoffman shared recently. "Please email [email protected]chools.org or call the school with the name." As to the opening ceremony on Saturday, Hoffman made known some key details.

"There will be live music from the high school choir and band, a group prayer with Pastor Ken, lighting of the Memory Tree, hot cocoa, and a visit from Santa!" She shared of the Sat – urday opening. In addition, Hoffman made known that many high school club students and families had contributed money, time, and effort for an additional 2000 feet of lights and 750 feet of extension cords over and above last year's display.

"We have amazing kids in this school district!" Hoffman said of helping put up the display. Earlier last month on No –

vember 13, several clubs were present to help out with the dis –

play. Among them were students from the National Honor So – ciety, but also the Future Business Leaders of America (FBLA), the FCCLA, DECA, FFA, and Skills USA. In short it was a group effort, as shared by Skills USA Ad – visor Jerry Lingen.

"Pretty much all the CTSO clubs," he said of student participation. "Pretty much every student group is helping out." Gina Sokup and Tori Szcech were among those with more to add to the matter.

"It's become part of a tradition," Sok – up said for the NHS of the light display that started last year amid holiday Covid shutdowns.

"We just started it last year," Szcech said in turn as a member of the NHS and Student Council. "It's just something to get the community involved with student organizations and make the community happy," she said. Mike Karlen Jr. agreed.

"Just to kind of bring the community together so they can enjoy a light show on Christmas," Karlen Jr. said of why he and others were present to help with setup No – vember 13. So how did the other groups get involved besides the NHS? Lingen of Skills USA shared the "Polly Hoffman asked us," he said of the Skills USA and other clubs getting in – volved with decorating. "We're happy to help. One of the items we look at in Skills USA is community service," Lingen said.

For those seeking a consolation for winter cold or else a good light show, Win – ter Wonderland opens Saturday December 11 at Chapman Park, the ceremony from 4 p.m. to 5 p.m. 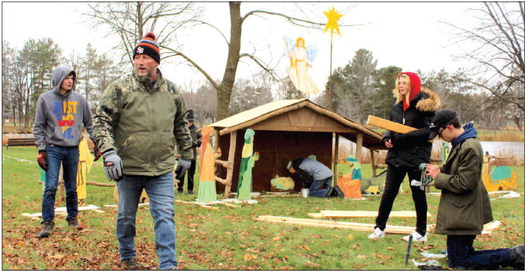 Members of Skills USA were present November 13 to lend a helping hand in putting together the light display at Chapman Park Campground. From left to right in front are: John Burgoyne; Jerry Lingen; Carter Ketterhagen; Emme Felmlee, and Clarence Mikalauski. Working in the background to the right of Lingen is Sasha Nitz. Photo by Joseph Back.