News
‘I was just the caretaker’

If you’ve been to the Pierce County Fair, chances are you’ve seen Fair Manager Ann Webb running here, there and everywhere, keeping things running smoothly. Running on little to no sleep, she has always had a cheery, efficient attitude.

After a record-breaking 2021 fair and 23 years of service, Webb decided to retire on a high note. Her last day is Jan. 3.

“You just know when the time is right,” Webb said. “I had considered retiring at the end of 2020, but I was not going out on a no-Fair year so after a record breaking 2021, I really knew it was the right time. It’s been a great run for me. My ‘caretaker’ duties are over now.”

Groundskeeper Matt Kelly, with whom Webb has worked

Ann Webb, now Ann Bluhm after her marriage in June 2021, will retire as the Pierce County Fair Manager on Jan. 3. She has served in the role for 23 years. Photo courtesy of Ann Webb RETIRE

the past several years, has cherished his time working with her and “Team Fair.”

“She’s got little feet, but they’ve got some big shoes to fill,” he said of her future successor.

And to that, Webb had a quick reply.

“They will be the caretaker,” she said. “They’ve got their own shoes to fill.”

In the fair office in the Seyforth Building, a small sign displays her mantra.

“Our fairs were in operation long before we were involved – and will continue to operate long after we are gone. We are the caretakers, assuming responsibility for the present time and becoming part of the rich heritage and tradition that will someday get passed on to someone else.”

Webb became the fair manager in October 2004 and to her estimation, has held the position the longest. She had been the fair secretary (now office specialist) for six years, so she felt she had a good understanding of what needed to be done to run a successful fair.

“I had worked under Kirstin Schilling for the 1999 and 2000 fairs, but then several interim managers, so I thought some stability in the department was needed,” Webb said.

Before becoming a fair expert, she worked for 16 years at Schuler Insurance Agency in Elmwood as a CSR/agent. When she left in 1998, she had three small children and needed something more part-time. The fair opening in November 1998 was the perfect fit.

After spending 16 years at Schuler, she swore she’d never stay in a position so long again. After all, there were so many people to meet and new things to experience. Fast forward 23 years and she’s had to take back those words. The fair gave her opportunities to meet people she otherwise never would have met, to travel, to take part in a rich history.

“Ann's dedication to the planning and coordination of the annual County Fair and many other events each year has successfully provided our community members and youth the opportunity to showcase their talents and inspire others,” Matthys said. “Her proven partnerships, high energy and ongoing positivity will set the bar for her replacement.”

A common misconception about the fair manager position perturbs Webb. It ruffles her feathers a lot, actually.

“People believe we start planning for the fair two weeks in advance, when actually we start right after the fair on Sept. 1 to plan the next fair,” Webb said. “The fair just doesn’t appear.”

One question that has always irked her is, “What are you going to do now that the fair is over?” Her retort was that she will go sit on her sofa, prop her feet up and eat bonbons. Managing the fair and events at the fairgrounds is a full-time job. Webb, whose position was listed with the county as .66 FTE, has been increased at her urging to 0.88 FTE. She donated more than 100 years of her time each year, unpaid, to complete the tasks associated with the fair. Simply put, that’s how much she loves the fair.

“Between the fair groundskeeper and fair staff, we do a lot of behind-the-scenes improvements that people aren’t even aware of that make the event run smoother each year,” Webb said. “But it’s not just me. It takes everybody – hundreds of volunteers and fair workers.”

Whichever question fair-goers asked the fair office the most that year, that’s what Webb and Kelly focused on improving the next year. Their goal has always been to make the fairgrounds family and user friendly. Whether that’s adding new signage, building more benches, graveling a parking lot, fixing the Round Barn foundation, reconfiguring parking, it’s all in the name of increasing safety and usability for fair-goers.

Kelly added that visiting area county fairs is helpful, because it gives them ideas to implement at Pierce.

Webb is proud of her organized system in preparing for the fair. In fact, surrounding counties look to her for guidance, which is a huge feather in her cap.

“Due to our successful fair, the Pierce County Fair is looked at by other fairs as an example to follow or learn from,” Webb said. “I have instructed various workshops at the state and international fair levels.”

Other feathers in the cap include bringing new grandstands to the fairgrounds, constructing the Kenny Hines Memorial Building (named after Kelly’s predecessor), and installing a beer garden. Perhaps what brings her the most joy is knowing the fair is a place for all to enjoy, young and old, city and country, visitor or resident. She will miss the people she’s met through the fair.

“There are some really great people out there and I’m glad I’ve gotten to know a whole new group of people because of my fair career,” Webb said. “Some of those friendships will last a life-time.

“I will miss my fair co-workers, fair associates, 4-H’ers and the fairgoers. It brought me great pleasure to see the enjoyment from the 4H’ers getting rewards for their accomplishments and the fairgoers excited about coming to the fair.”

What she won’t miss is Mother Nature sometimes wrecking her carefully laid plans. Even the most organized woman on earth couldn’t prepare for that.

“I can plan and plan and plan, but Mother Nature loves to throw a wrench in our planning which can change things in an instant,” Webb said. “During the four days of the fair, you have to work on the fly.”

You also have to work on little to no sleep. By the time Sunday of the fair rolls around, it’s been a 100-plus hour week.

Another challenge that threw itself in her path was COVID-19. She doesn’t mince words when talking about it.

“It was horrible, just awful,” Webb said. “It was by far the hardest I ever planned.”

After planning for 320 days, the decision was made to cancel the 2020 fair 40 days prior to opening. Writing contingency plans weekly as the situation changed became the norm. It was a constant, huge stress not knowing what was coming or if a fair would happen.

“So many contingency plans were drawn up, then to have it cancelled was heartbreaking,” Webb said. “In 2021 it was still touch-and-go, but in the end, we were successful in having a record-breaking fair without incident.”

People didn’t take the fair for granted this year. They embraced it and each other, Webb said. Just like she won’t take for granted the satisfying career that flew by in an instant.

Webb and her husband plan to travel, once the baton is passed. She also enjoys quilting, gardening, golfing and volunteering. You might even see her as an Open Class exhibitor.

As a new caretaker steps in, Webb has a request for the public, as well as words of wisdom for whoever takes on the role.

“If you are a present exhibitor, please continue to exhibit or if you have never exhibited, give it a try,” Webb said. “I hope that everyone will be supportive of the new manager and continue to work together for the betterment of the Pierce County Fair, long into the future.”

She hopes the fair remains one of the best county fairs in western Wisconsin while remaining affordable for all to attend.

“The fair is a very fun event to plan and manage, but it’s a business and needs to be run like a business,” Webb said. “Some of your decisions may not be favorable to all. You need to be super organized to keep the pieces to this very large jigsaw puzzle together to pull of the “Four Best Days of Summer.”

(From left): Ann Webb Bluhm, Kirstin Schilling and Frank Ginther in a throwback photo from the 1999 Pierce County Fair season. Bluhm was an office specialist, Schilling was fair manager, and Ginther was the 4-H/youth development agent. Photo courtesy of Pierce County Fair Archives 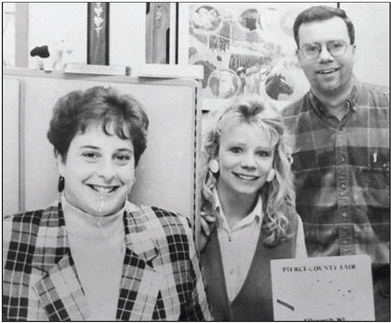