Sheriff honored as First Responder of the Year at Ellsworth ceremony

“I couldn’t think of a better person who’s seless, dedicated and has basically given everything she has to this department.”

ELLSWORTH – Pierce County Sheriff Nancy Hove was honored Sunday afternoon with a First Responder of the Year Award for the 93rd Assembly District. Rep. Warren Petryk (R-Town of Washington) presented the award to Hove in a ceremony with colleagues and friends Sunday at the Ellsworth Cooperative Creamery.

Hove was given a standing ovation from the packed room.

“Nancy’s dedication to communities did not dampen when she was diagnosed with a brain tumor. In fact, her desire to make a positive difference in communities remained as strong as ever as she, in addition to continuing her duties as sheriff and enduring intensive chemotherapy, began to organize fundraisers to help others who are also fighting a battle against cancer,” a statement from Petryk’s office said.

Hove has been sheriff 14 years. She was nominated for the honor by Pierce County Patrol Sergeant Chad Koranda.

Hove had intensive treatment for brain cancer last winter. At the time, she told The Journal, “I’m going to beat this. I’ve got places to go and things to see.”

State Rep. Warren Petryk presented Pierce County Sheriff Nancy Hove with a First Responder of the Year Award for the 93rd Assembly District. Hove stayed committed to serving the community while fighting brain cancer and has worked to help others going through cancer. Photo by John McLoone SHERIFF

“Sheriff Nancy always has the best interest and the safety and welfare of every man woman and child in Pierce County, number one, and that includes during the good times and that includes during the challenging times,” said Petryk. “As we all know Nancy has had more than her share of challenging times on a personal level and a health level. Through all of those struggles, she comes out shining and doesn’t think about herself. It’s like, ‘Ok, now what can I do for others that might be in the same position after going through all of that?’” Petryk showed the wristband he wears every day, emblazoned with “Sheriff Nancy – No One Fights Alone” on it that was sold as a fundraiser to help in Hove’s battle.

“There is certainly nothing we could do say to really sum up who Nancy is to us, but your presence here today speaks volumes,” he told the crowd.

Pepin County Sheriff Joel Wener was one of several sheriffs from adjacent counties attending the event. “Nancy’s little bit of stubbornness, as well as the outpouring of support from family friends and the community has allowed her to overcome an insurmountable challenge and kick cancer’s butt. To find out a fellow sheriff who’s also been a mentor to me since I became sheriff, that rocked my world,” said Wener. “Nancy’s openness during this journey has helped many, and she continues to help many others diagnosed with cancer. I have personally witnessed family and friends of people diagnosed with cancer come up to her and ask her to share her story with them and let them know her experiences and what comes next.”

Koranda told the audience that he nominated Hove because requirements for the honor are selflessness and dedication.

“We have a person who had the opportunity – I think everybody would agree, with what she was dealing with on her own – to hang it up. And she didn’t. She stuck it out,” said Koranda. “She’s been selfless. She’s been voted as sheriff by our community members four times. That in and of itself is unbelievable.”

Koranda said that with Hove’s dedication to service, his nomination letter “wrote itself.”

“I couldn’t think of a better person who’s selfless, dedicated and has basically given everything she has to this department. Then you add on the fact that she organizes her own cancer walks to help other people who are in her shoes,” said Koranda.

Petryk organized the Pierce County event because he was out sick when Hove was honored in a state capitol ceremony. When he presented the plaque to her, Hove earned an extended standing ovation.

She credited her family and medical team for getting her past her “bump in the road.”

She recalled being at a law enforcement conference, and a colleague approached her.

“’He said, ‘Can you talk to my wife. She was just diagnosed with a brain tumor.’ So I talked to her, gave her my information. Now I made another great friend,” said Hove. “Hopefully, I can keep spreading the word, keep doing what I can do to make people realize they can do it. They can make it through.”

A standing ovation was given to Pierce County Sheriff Nancy Hove Sunday afternoon as she was honored by State Rep. Warren Petryk with a Wisconsin First Responder of the Year Award. The event was held at the Ellsworth Cooperative Creamery. Photo by John McLoone 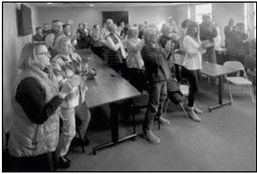