In week two of the Wissports weekly coaches’ poll, the Prescott boys basketball team ranked ninth in the state for Division 3 basketball teams, a standing that is likely to go up for week three after Prescott added two more wins to its overall record.

After starting the season 3-0, which earned Prescott the ninth ranking for Division 3 according to coaches, Prescott added wins against Ellsworth and Regis to improve to 5-0 overall for the season.

The game against Ellsworth wasn’t particularly close. Prescott traveled to the hostile road environment, played well, and went home with an 83-51 victory to remain undefeated. That game on Tuesday, Dec. 7, was never in question for Prescott.

The Cardinals got off to a 15-6 lead less than six minutes into the first half. The scoring for Prescott included buckets from junior point guard Jordan Malmlov and sophomore forward Dallas Wallin. Malmlov and Wallin accounted for 10 of Prescott’s first 15 points. The lead eventually ballooned into a 25-9 lead with nine minutes remaining in the first half.

The aforementioned Wallin was attacking the Ellsworth defense in every way imaginable. He was breaking defenders down and driving to the bucket for and-one plays, he was making deep three-pointers, and he was playing great defense. His play in the first half – both offensively and defensively – was the driving factor in the Cardinals’ 43-26 halftime lead. Prescott head coach Nick Johnson spoke about Wallin’s game.

“The difference between Dallas (Wallin) last year and Dallas (Wallin) this year is just confidence,” Johnson said. “He needs to realize he’s really good. I just talked to the team about this, and I told them, ‘The best thing about Dallas is that he plays both ends of the floor.’ He is an amazing defender. Every team we play he’s guarding their best player and that’s a tall task. That’s what I’m most proud of.”

In the second half, it was more of the same for Prescott. Their five-out push-the-pace style offense was simply too much for Ellsworth to overcome. Multiple times throughout the second half Ellsworth trailed by more than 30 points. The final score was an 83-51 victory for Prescott. After the game, coach Johnson of Prescott spoke about the win.

“We played well, but we know it’s tough for (Ellsworth) it’s a tall task and it’s their first game,” Johnson said. “We’re four games in and this is their first game. That’s a huge advantage, even if it is on their home floor. They are only going to get better. But we played well. Our defense has set the tone. Our defense can lead to easy buckets. We get good stops, and we get easy layups.”

Johnson spoke about the talent and depth on his roster this season. He stated that Prescott has seven guys on their roster that can score 15-20 points on any given night.

“We’ve got so many ways to hurt teams,” Johnson said. “We’ve got seven guys that can score 15 or 20 points, that makes my job really easy.”

For Prescott, it was another dominant performance. For Ellsworth, it was a loss in both the season and home opener. After the game, Ellsworth head coach Jordan Petersen spoke about the defeat.

“They’re a great team, they’re ranked 9th in the state for a reason,” Petersen said. “It’s a tough one for us to start with. Bottom line is that we weren’t prepared enough and that’s on me. I don’t think our rotations were well defensively, offensively we didn’t rotate the ball and we didn’t move effectively.”

Part of the issue for Ellsworth was turnovers. The Panthers had too many turnovers which led to easy Prescott transition buckets. Coach Petersen spoke about the turnover issue.

“It was a little bit of rust and not being as crisp and efficient as we need to be in practice and harping on that,” Petersen said. “It’s something we need to clean up and just get back to the fundamentals.”

Although it was a tough night offensively and defensively for Ellsworth, there were some positives to take away, especially for it being the first game of the year against one of the best teams in Wisconsin.

“There were stretches there in the first half where we were competing with them for short periods, that is a positive,” Petersen said. “We were able to compete with them, but we just have to do that for a full 36 minutes. We had some younger guys step up and play some effective minutes and score their first varsity points. Griffin Blomberg, Lance Gipford and Wyatt Blomberg all scored their first points. It’s a good moment for them.”

Perhaps the most important moment of the night for Ellsworth was an unfortunate one. Late in the second half, star player Jack Janke limped off the floor with an ankle injury after taking a hard foul under the basket. He eventually returned to the game but didn’t appear to be 100% healthy. Peterson spoke about Janke’s status.

Three Prescott players scored over 15 points, including Malmlov, Wallin and junior guard Brandon Stuart. Those three players have been the most impactful this year and have been excellent both offensively and defensively.

With the win, Prescott improved to 4-0 and Ellsworth dropped to 0-1 for the season. As of Monday, Dec. 13, Prescott is 5-0, with its most recent win coming against Regis, which was a 70-55 victory on Saturday afternoon.

Prescott’s undefeated 5-0 record will likely improve its ranking in the weekly Wissports coaches’ poll as the new poll gets released.

Above, Brandon Stuart of the Prescott Cardinals takes and makes a deep threepointer in the road rivalry game against Ellsworth on Tuesday, Dec. 7. Stuart finished the game with 17 points and was efficient from the floor. At left, Ellsworth Panther Jack Janke drives to the bucket and makes a tough contest runner over multiple Prescott defenders. Janke’s 22 points and six rebounds weren’t enough to overcome the high-powered Prescott offense. Photos by Reagan Hoverman 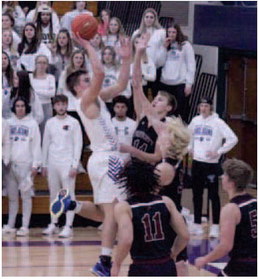