Park rode hot outside shooting to build a 10-point halftime lead, then hung on in the final minutes for a bigtime win over White Bear Lake Thursday.

The Wolfpack led 30-20 at the half but had to survive a furious rally by the visiting Bears to claim a much-needed 49-47 victory.

The Bears trimmed Park’s lead to 41-37 with 10 minutes to play and the rest of the game was a dogfight. Park clung to a 46-44 lead with three minutes left and 49-46 with a minute to play. White Bear Lake missed several chances in the final minutes to tie the game, but the Wolfpack defense denied them each time.

“They’re finding their way,” said Park coach Stephanie Tolkinen. “They’re learning how to play with a little different personnel than what we had a year ago. And I think White Bear tends to bring out the best in us at times, too. We’re just trying to take it one game at a time and learn to trust each other, learn to build that chemistry, learn to trust our offense and just learn how to play with each other without pressing.” Tori Henderson scored 16 points and Justine Jameson 15 to lead Park. Sydnee Nelson had eight and Elsa Olson six.

“I think we just really brought the energy tonight, we were really ready to play,” said Park’s Avery Corrigan. “We always have an intense rivalry against White Bear Lake and it was just really fun to show.”

The Wolfpack drained six three-pointers in the first half to establish control of the game. That hot-shooting cooled off a bit after the break, but Park still made nine three-point field goals for the contest. Henderson connected on four treys, while Nelson and Jameson had two each.

As much as the offense clicked better in this game, it was an improvement on defense which secured the win, Tolkinen said. “This defense, we’ve struggled with it the last two games that we’ve played with Forest Lake and Burnsville it came down to making stops on defense. You know sometimes on offense it’s not going to work, but we have to get down and dirty and play better defense and so we spent a lot of time on that yesterday getting kids on the same page.”

Host Forest Lake pulled away from a narrow 23-21 lead at the half to defeat host Park Tuesday, winning the SEC opener for both teams, 50-43.

Henderson led the Wolfpack offensively with 22 points. Jameson was held to six points. Nelson and Emma Ambroz had five each. 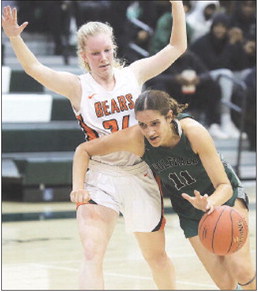 Park senior Justine Jameson drives to the basket in the second half against a White Bear Lake opponent. Photo by John Molene