PLUM CITY – When 12-year-old Kaden McMurray zeroed in on the buck through his scope Nov. 22, he thought it was a big 10pointer. He was wrong.

His stepdad and hunting partner in the blind, PJ Hines, said it was either a really big doe or a monster buck, but at just over 400 yards away, they couldn’t quite tell. It was about an hour before dusk on the Monday of gun deer week.

Hines cracked off a shot, but missed. It was too far away.

“Oh crap, I’ve got to shoot him now,” Mc-Murray said to himself.

The buck, which turned out to be an 18pointer with two tines broken off, had been taunting the pair on game camera footage for years. The stately buck was nocturnal; it never appeared during the day, but he appeared in hundreds of night photos.

“He was the horse I could never catch,” Hines said. “My unicorn.”

They didn’t nickname the brute, although usually they christen monster bucks they’re after. However, they collected a shed off him two years ago that confirmed he was king of the forest.

The buck had come out of the woods after 10-12 does had trotted through. Hines knew it was likely a buck was trailing the group of does that that fateful Monday. So they waited. And they were rewarded.

Even though Hines missed him at about 400 yards, the pair was ecstatic when it kept coming toward them. It stopped about 220 yards away and turned to look at them. They weren’t yet positive it was their elusive unicorn, but they

positive it was their elusive unicorn, but they had an inkling. The two decided to count 1, 2, 3 and shoot at the same time. Boom! Boom!

“It wasn’t perfect,” Hines laughed. “But it’s something neither one of us will ever forget.”

The duo’s shots entered 1.5 inches apart and their exit holes created a perfect Figure 8, something they could never replicate in 100 years, Hines said. The buck dropped almost instantly.

“I think I was more excited than him,” Hines said of Mc-Murray.

The seventh grader may have been in shock. He said he didn’t know the buck was The Buck, so he just focused on where he was shooting. After all, it was his first buck. Although he’s been hunting since he was 8, he had shot does every year. And what a first buck to harvest. He said when he told his friends at school, they were proud of him. Plus, no one else had harvested a buck that size.

“I’d shot plenty of does, but no bucks,” McMurray said.

Not five minutes before that, Hines daughter, 17-yearold Allysha, had harvested her own deer. She had a score to settle, as she had missed one on opening morning and was not too pleased. That buck had split brow tines and hooks, a clue that some “funky genetics” are at work, Hines said. When Hines and McMurray told their family they had finally harvested the nocturnal buck, no one believed them at first.

The prize nontypical buck had 16 intact points and Green-Scored 179 5/8. A shoulder mount will capture the story forever.

McMurray may never top this buck, but he’s willing to try. He’s planning to possibly try bow hunting next year. As for Hines, the buck is just the icing on the cake.

“I’ve raised him since he was 1,” Hines said. “He’s my hunting partner for life.” 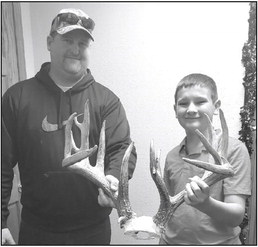 PJ Hines (left) and Kaden McMurray show the rack of the 18-pointer they harvested Nov. 22 near Plum City. The nontypical buck Green Scored 179 5/8. Two points are broken off.