The Hastings City Council on Dec. 20 recognized employees for five year milestones of working for the city, ranging from five years to 35.

The council annually honors the employees at its last meeting of the year.

“One of our highlights of the year is when we get to shake hands with these people who have worked for the City of Hastings for numerous years,” said Mayor Mary Fasbender.

The 22 employees have dedicated a total of 330 years of service to the city.

“We are fortunate to have their knowledge, dedication and continued service,” said City Administrator Dan Wietecha.

25 years – Joe Birk and Cory Likes. 30 years – Greg Page. 35 years – Mark Schutt. The council also had the opportunity to honor citizens who are wrapping up service on city commissions and panels.

Photo courtesy of the City of Hastings velopment and Redevelopment Authority) President Dennis Peine with his vision in getting major riverfront and commercial developments off the ground years ago. He served on HEDRA for 12 years and the city planning commission for six years.

“All the work we’ve been doing with Hudson Manufacturing (The Confluence development site), with some of the riverfront renaissance. Loan programs, the industrial park, those types of things are done through our HEDRA board,” said Hinzman.

Peine is an architect, and his experience has been invaluable to the city.

“I’ve been able to serve with Dennis and learn from his expertise,” said Hinzman.

Of the riverfront, Hinzman said, “Dennis was one of those first people that came forward and said we have to do something better down here. Eventually we have what we have today. It takes people like Dennis to come forward with ideas. Also honored was planning commissioner Emily King, who Hinzman said served for four years.

“It was always very insightful, some of the things she would bring forward,” said Hinzman.

The council also appointed or reappointed citizens to various commissions:

The city council also passed a resolution again designating the Hastings Journal as its official newspaper. The Journal originally received that designation in July. 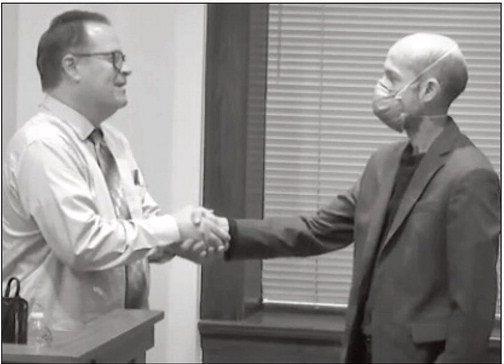