First, let me say this, I love Spiral Pizza, just like most of Hastings does. It is OUR pizza, and it has been OUR pizza since before I was born. Spiral Pizza has been in the same location since the mid 1960’s when Wayne Koepke opened it there. According to the new owners, the timeline was a little fuzzy on exactly when Tom Reinardy purchased the business, but it was either 2000 or 2001. Reinardy owned Spiral for at least 20 years, that much is known, they are learning a lot in a short time, so I didn’t press that one too hard.

So, who are these new owners and what are they going to change? Well, let’s an- swer the most important part of that question for long time Spiral lovers, the answer is nothing. Well, at least nothing on the menu. The pizza and chicken will remain the same recipe we all love. As of right now, the prices are staying the same with the caveat that would change if needed due to rising production costs.

You can breathe now; I know I certainly exhaled a sigh of relief. Now that the worry is gone, take a few minutes and learn about the new family that owns Spiral Pizza.

And the new owners? They’re cool and they struck me as good people. I spent over an hour just getting to know them for this story, and that could have easily been three or four hours.

Dave and Cheri Maniak (pronounced mahn-ee-ack) are the proud owners of Spiral Pizza and they are hoping to turn a love of pizza into long term business success in Hastings.

“About 15 years ago, shortly after we got married, we started trying to develop our own pizza recipe at home, and it was getting real good. And then it was kind of always a dream of ours to own a pizza shop and do it together. But kids happened and slowed the progress down a little bit. And that was kind of the end of it for the last 15 years,” explained Dave.

Dave grew up in Coon Rapids, Minnesota roughly an hour drive from here.

Cheri, on the other hand, is a Hastings native.

“I was born and raised here and I grew up on Spiral. I’ve always loved Spiral Pizza. It’s like, my favorite. We had the opportunity come up, and we’re like, ‘let’s do it!’.”

“We wanted to come back into Minnesota for the family, friends, stuff like that. We’ve been in Colorado for 20 years,” Dave added.

This is where their story takes a funny turn. Let’s rewind the clock a bit. Cheri and Dave both graduated in 1996, Cheri from Hastings and Dave from Totino Grace. Upon graduation, they both chose to go to Mankato State University (now Minnesota State – Mankato), where they did know of each other having seen each other, but never truly knew each other or hung out. After graduating from MSU, they individually both made a move to Colorado.

“One night I went to a Bob Dylan / Merle Haggard concert with some friends of mine and turned around and she was there, I almost stepped on her toes,” Dave said with a huge smile.

Of course, that led to the ‘hey, you look familiar’ conversation, they worked that connection out which led to an exchange of information that ultimately brought them to an exchange of vows. The vows brought them a family, a daughter that is 13 and a son that is 11. Fate has a funny way of bringing the right people together and even bringing/them/to/the/right/fit/ for a career.

Cheri explained what brought them back to Minnesota. “I would have friends text me ‘Spiral is for sale’, See SPIRAL PIZZA Page 9 because they know how much I love Spiral. I’d be like, oh, yeah, like, that’d be a dream. It’s just the numbers didn’t work out and we just kind of let it slide. Then I was home this past July. I’m with the kids and I came in here. Tom was working, I had ordered pizza and I picked it up and I was like this is still for sale. He was like yep, the price got dropped down a little bit. And then I went home and brought it up again.”

Dave owned a successful construction company in Colorado, so the idea of owning Spiral got put on the back burner for a little while. He was doing what guys do, thinking of all the responsibilities he had as a provider and he had a lot going on with the construction business. One day, he had a job get pushed back due to a supply delay, so he had a free day.

“I was sitting there and I think I saw pizza commercial come on TV. It sparked my interest again and I was like you know what? I’m going to make a phone call, see what I can dig up. So, I got online and I started digging around and I found the realtor for here. I just picked up the phone and it made the call, said, you know, can I get some details on it?” explained Dave. They crunched numbers and sure enough, they figured out how to make it work. The time from the first phone call to signing the dotted line was 60-90 days. They packed up, sold off a house, a business and stuff they were not bringing with them to Minnesota in less than three months.

Dave has been flying in to shadow Tom to learn the restaurant side of things and get to know the staff. It was more important to Dave and Cheri that the staff was comfortable with the transition than it was for them to learn all the ins and outs of running a pizza place. They wanted to keep the staff and they have done so. As of a few days before Christmas, they have not lost one single staff member in the transition, Tom included.

Now, to be fair, Tom is helping with the transition so he can retire, so he will not be around the restaurant much longer, but that was the point of the ownership change. Also, The Maniaks are looking to add staff. They would love to hire a couple part time cooks to support the staff they have and allow people the opportunity to have the days off that they might need. If you know of anyone looking for work, Spiral is hiring.

At the beginning of the story, I made it clear that there were not going to be changes to the menu, I did not say there would not be changes to the building. Dave’s construction background has his mind going looking for ways to make the Spiral building better. A face lift if you will. Remove and replace the 1960’s paneling, brighten up the entry, maybe install the old school tin tiles on the ceiling. A refresh of the interior and eventually the exterior.

That last paragraph should also answer a question surrounding a rumor that Spiral Pizza is moving. They are not. A rumor was making its way around town that Spiral was going to take over the old Sunkissed Tanning building by Kwik Trip, that is not the case. They are staying right where they are, the building is too iconic in Hastings and a large part of the restaurants and towns history.

The new owners of Spiral Pizza plan to be here for the long haul. They are not going to mess with the recipes we know and love, they look forward to getting to know more of the community through the business. That will lead to helping in the community once they have a clearer understanding of how Spiral Pizza works. Until then, stop in, say hi to the new faces when you pick up your favorite Spiral menu item and welcome them back to town. 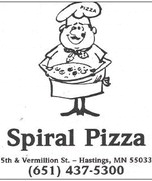