Over the holiday break, the River Falls High School boys basketball team was one of three local teams to compete in the annual Menomonie Holiday Showcase, a tournament in which the Wildcats won both games to improve to 8-1 overall for the season.

Throughout the season, River Falls head coach Zac Campbell has stated that getting out to a hot start and building an early lead is critical to team success. In the opening minutes of the Tomah game, the Wildcats did exactly that. River Falls began the game on a 13-0 scoring run that featured buckets from senior forward Ethan Campbell, senior guard Jacob Landgraf, senior center Kaden Rowekamp and senior guard Ryan Langer. With less than 12 minutes remaining in the first half, Tomah still wasn’t on the board. Coach Zac Campbell spoke about the hot start.

“We’re aware of that and we try to talk about (getting out to a hot start) because we’ve struggled through some slow ones,” Zac Campbell said. “It changes things. We dictated most of the tempo there in the first half because of the start and having them on their heels needing to make plays.”

Although Michael Schurman didn’t contribute points to the 13-0 scoring run to start the game, he played tough defense, helped in forcing turnovers and rebounded the ball well. He finished the game with four points, six rebounds and four assists in the victory against Tomah. It was his first game back after missing two games due to illness, according to team reports. Zac Campbell spoke about Schurman’s return to the starting lineup.

“He’s still a little bit a step slow and he’s coming back from the sickness,” Zac Campbell said. “In terms of being able to bump Jack (Hirstein) to the off guard and Michael (Schurman) to the point guard and being able to have that dynamic, it changes our flow offensively.”

The Wildcats were in a flow offensively throughout the first 18 minutes and took a 30-19 lead into the halftime intermission. During the break, it seemed like Tomah didn’t have an answer for River Falls, and that the game would likely become a blowout in the second half. Four minutes into the second half, the Wildcats had a 37-22 lead.

That’s when Tomah went on a long scoring run led by senior Dustin Derousseau, who cut the Wildcats lead down to three points with just under six minutes remaining in the second half, which forced a timeout by Zac Campbell. After the game, he spoke about the run that Tomah made.

“Derousseau is a really good player and he scored his 1000th point tonight,” Zac Campbell said. “When they made their run in the second half, we really lost our helpside defense on him and gave him too much space.”

“When they made that run, we missed some looks and got pouty and soft on the defensive end and stopped being who we wanted to be on the physical side,” Zac Campbell said. “Then Jacob (Landgraf) hit that three and put us up six. All of a sudden our bounce is back, we’re rebounding harder, we’re getting to things and doing it all better. We wish we had that consistency, but we’re dealing with high school kids in a game of emotion.”

When the final buzzer sounded, River Falls left the court with a 64-49 victory against Tomah to improve to 71 overall for the season. The following day, River Falls faced off against Antigo, a team that entered the game with a 1-8 record. Their struggles throughout the 2021-22 season continued against River Falls.

The Wildcats’ dominant offense and solid defense contributed to a 42-16 lead going into the halftime intermission. The second half was more of the same for River Falls, as Zac Campbell’s varsity squad cruised to a 78-40 victory to improve to 8-1 for the season.

The 78-point performance for River Falls was a true team effort. Four Wildcats finished the game in double-digit scoring including Landgraf with 17, Hirstein with 11, Ethan Campbell with 11 and Schurman with 10.

After the win, Zac Campbell recapped the Menomonie Holiday Showcase and spoke about where his team is at approximately a month and a half into the season.

“Christmas breaks are tough to play over,” Zac Campbell said. “It’s tough, but to come in and get two (wins), especially with that first game against Tomah, that was a really important section win for us. Antigo is having a tough season, but it was a point for us to come in and not just go through the motions.”

Although River Falls has won nearly every game this season and has looked good in pretty much every game, Zac Campbell said that they are executing better right now than they have all season – the Wildcats are hitting their stride just as the calendar flips.

“The answer is our execution,” Zac Campbell said. “We won games early, but we won those off of athleticism and now we’re playing and winning games because of our execution. Yesterday was our best film checkout of the year in terms of getting what we want. From the outside, it’s ‘Oh, we’re just winning games.’ But we’re executing way better than we did earlier in the year.”

The Wildcats won’t get any easy games on the schedule coming out of Christmas break. Their next matchup is on the road on Tuesday, Jan. 4, against Eau Claire North.

“When we come out of the break and see Eau Claire North, they’re probably the best defensive team we will see all year,” Zac Campbell said. “That execution piece needs to be in place or we’re going to really struggle.” 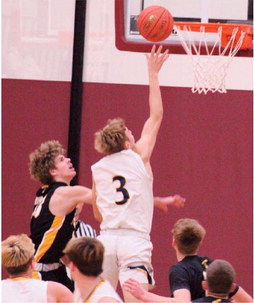