Kelly Grill sustained roof and window damage in the December 15 tornado, but is structural-
News
‘The first thing we could hear was the roof ripping off’

Kelly Grill has been deemed structurally safe by an engineer and plans to reopen for business as soon as mid-January, dependent on contractors.

“The engineers were here and said everything is ok structurally, so we’ll be able to repair and reopen,” Kelly Grill owner Kelly Loibl shared recently. “As soon as we can get the entryways safe and doors back on we’ll reopen.”

That being said, Loibl recently sat down with us in her restaurant at First and Emery to share her tornado experience, and it’s quite the story.

“Me and my mom, Roger, and my son Jaxen were all here,” she said, sharing that her mom had come from Cadott to be safe, but then had to deal with the tornado in Stanley. Both Kelly’s car and her mom’s are totaled, with her mom’s unrepairable. So what were they doing when the storm struck?

“We were watching the news, and it was focused on an area of rotation down by Neillsville,” Loibl shared of sitting at the bar opposite the nearby depot. “The radar was zoomed in,” she said of Neillsville, the location of storm rotation an hour away helping them feel safe. Severe weather sirens went off, but this was nothing unusual if somewhat out of season.

Then the tornado struck. "The first thing we could hear was the roof ripping off,” Loibl said of where she and her mom sitting on the north end of the bar. “Then glass went and we started running. It was over in like three seconds.” Loibl and her mom ran toward the house door feet away when the glass went, glad the storm went fast.

“I’m glad it was as brief as it was,” she said. “If it was on the ground much longer I don’t think there would be much left.” The building in which Kelly Grill is located dates to 1886, while the windows blowing in knocked out the poker machines, among other effects.

Across the street, meanwhile, a building owned by Josh Walters suffered significant dam age, with a wall taken out and the roof damaged. Back at Kelly Grill, the storm tore off the outside stairway. But while glass broke and debris including mud blew in to be cleaned up, Loibl said that, “the most important part is that nobody got hurt, and nobody in town got hurt. I can’t thank everyone enough for what they’ve done.” Others just blocks away from the center had a different experience altogether of the storm.

Yes, nothing happened at the library,” library director Elizabeth Miniatt confirmed in regards to the storm of December 15. “Just the power outage, that was it.” Miniatt shared in addition

ly safe and plans to reopen as soon as it can get contractors to fix doors and windows.

that the library board meetings were now on the second Wednesday (not Tuesday) of the month, while the Friends of the Library was back in action. Still to bear tangible fruit, are any plans for a library addition on the nearby vacant lot, with the addition requiring outside collaboration with government agencies as well as local input, given the building's officially historic status as such.

Over and across town, meanwhile, Ahmed as the owner of DJ’s Mart on North Broadway had his own experience to share, of no water at home.

“I hated it,” he said of the December 15 storm that made the well at his home non-operational and almost led to personal tragedy as well. "I actually set myself on fire trying to start the fireplace." Setting oneself on fire while try ing to stay warm?

The scene where Kelly (left inset) and her mom were sitting when the tornado hit. Above right corner, a piece of window glass embedded in the wall just around the corner. Kelly and her mom were unharmed. Inside grill photos by Joseph Back. 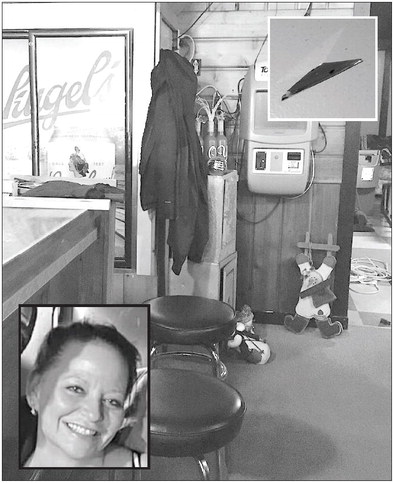