The St. Croix Valley Fusion has established a culture of excellence with their conglomerate hockey team and is once again alone atop the Big Rivers Conference standings, which has become an expectation for head coach Matt Cranston’s squad.

On Thursday, Jan. 6, the Fusion hosted a game against the Woodbury Royals. In that game, the Fusion jumped out to a quick 1-0 lead early in the first period when junior Kendall Sundby scored a goal less than two minutes into the game.

After Sundby’s goal, the game turned into a defensive stalemate that lasted the rest of the game. The Fusion sent the Royals back to Woodbury with a 1-0 loss. The Victory improved the Fusion’s overall record to 10-3 for the season, including a perfect 4-0 record in conference action. After the game, coach Cranston spoke about the win.

“We played very defensively,” Cranston said. “Our last game was the same. We beat the number two ranked team in Wisconsin kind of like this. They had a lot of talent and we just worked on our defensive skills. Our stick-on pucks, our blocks, that’s how we roll. If we are playing someone as good or better than we are, we play that defensive style, and it works.”

Although the home win against Woodbury was non-conference, the St. Croix Valley Fusion have been dominant in conference action as well. They are currently in first place with the aforementioned 4-0 record, while Hudson is in second place with a 3-1 record. Cranston spoke about being in first place in the conference standings.

“We’re happy with how things have gone so far,” Cranston said. “Our goalie is playing fantastic of late and she has a lot to do with our success. We work a lot on defense because that’s kind of our style.”

Several times throughout the postgame Cranston spoke highly of junior Jasmine Petersen, who as of late has been playing her best hockey of the year as the Fusion’s goaltender. She currently has a save percentage of .879.

The lone goal of the night for either team was Sundby’s early first-period goal. For the season, Sundby has 25 points, which is 13 more than the second-most for the Fusion, which belongs to junior Kiara Therriault with 12. Cranston spoke about Sundby and what she means to this team.

“She’s just solid, solid as a rock,” Cranston said. “She’s got tons of talent and played forward for the first time tonight just to kind of feel them out and get them off-kilter. We shook things up and played people at positions different than we have for a long time.”

Sundby’s play has contributed to the firstplace slot in the conference standings, in addition to the hot streak that goaltender Petersen has been on. Cranston was very clear that a conference title is an expectation for this program based on their history of success.

“We knew we were going to be, one of our goals is to hang another (conference title banner) for the Big Rivers,” Cranston said. “We started out by beating the Western Wisconsin Stars, who are really good. They’re probably, Hudson may be ahead of them, but they’re good. We’ve always been above .500 and we’ve dominated for 16 years. The expectation is conference championship every year.”

In the four conference games this year, the Fusion have outscored their opponents 14-6 and the defensive strategy that Cranston spoke about implementing has been the best in the Big Rivers Conference thus far.

The next game on the schedule for the Fusion will be one of their toughest of the season. The Fusion will travel to Ashwaubenon to play the Bay Area Ice Bears. The Ice Bears currently have a 10-2 record this season and have two players, Jordan Brady and Makayla Spejcher, with 25 or more points this season.

The game against the highly touted Ice Bears is on Friday, Jan. 14, and is slated to begin at 8:30 p.m. at the Cornerstone Community Center. 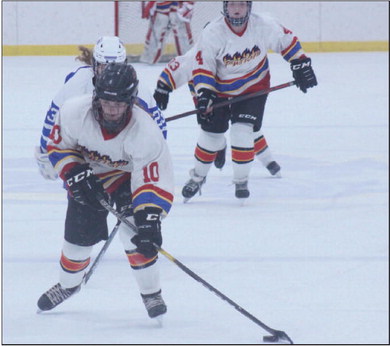