It could be a very special winter sports season in Pierce County based on how the Prescott, Spring Valley and River Falls boys basketball teams have played through the first approximately two months of the season.

To put the success of these teams into context, they have a combined overall record of 27-3 this season. Spring Valley is 7-1 and both Prescott and River Falls are 10-1. Perhaps the best part is that they are all in different conferences and all could bring conference titles to their respective schools.

Starting with Spring Valley, the Cardinals have flown under the radar this season. The team has only one loss this year, despite missing one of their two leading scorers from last season in Connor Ducklow who sustained an injury during the football season that has kept him on the sideline since the basketball season began.

Before the year began, head coach Rob Bosshart stated that the expectation for this team was to compete for a Dunn-St. Croix Conference title – even without Ducklow in the starting lineup for several months.

On Friday, Jan. 7, Spring Valley hosted Glenwood City in a conference game that was over quickly. Spring Valley jumped out to an early lead and never looked back en route to a 68-36 home victory.

Earlier this year, Bosshart stated that when they get Ducklow back it will provide even more energy and talent to a team that currently has no shortage of either. As of Monday, Jan. 10, Spring Valley has a 3-1 record in conference action and is currently tied for second place in the conference standings.

With a return from Ducklow in the coming weeks, Spring Valley is right in the middle of a chase for what would be a second consecutive conference title. The next game for Spring Valley is on Thursday, Jan. 13, on the road against Colfax. That game will tip-off at 7:15 p.m.

Prescott survives last-second thriller against Elk Mound On Saturday, Jan. 8, Prescott traveled to Elk Mound to compete against the Mounders. For Prescott, it was the first time all season that the three-pointer wasn’t falling and unsurprisingly, they played a close game when the shots weren’t falling.

In the game, Prescott shot 7-28 from three-point range, which included five players combining for 0-13 from behind the arc. In the first half, Prescott outscored Elk Mound 35-29. However, in the second half, the Mounders made a charge at the Cardinals and forced the game down to the wire.

Prescott survived the closing seconds and secured the victory. Dallas Wallin was the difference-maker in the game. He finished with 27 points, 12 rebounds, one assist and one steal. His efforts were complemented by those of senior Jordan Malmlov, who was the only Cardinal who was dialed in from long range. Malmlov finished the game with 18 points, three rebounds, three assists while shooting 5-11 from three-point range.

That game in Prescott has serious playoff implications as well as serious conference championship stakes. The Tuesday night game will be played at 7 p.m.

River Falls eyeing second consecutive BRC championship After a 45-30 win on Friday, Jan. 7, on the road against Menomonie, River Falls improved to 5-1 in Big Rivers Conference action which puts the Wildcats in sole possession of second place in the standings, trailing only Eau Claire Memorial which holds a perfect 6-0 record.

It’s important to note that in the first matchup between these two teams, senior River Falls starting guard Michael Schurman missed the game with an illness. He’s not only the primary scoring option for the Wildcats, but he’s also a critical rebounder and always guards the opponent’s best player. To say that they missed him would be an understatement.

In the next two weeks, the Big Rivers Conference standings will shake out and the playoff picture will become clearer. But one thing is for sure, without a win on the road against Memorial on Jan. 21, the path to a River Falls conference title is hard to imagine.

The next game on the schedule for River Falls is on Tuesday, Jan. 11, when the Wildcats host Holmen in a non-conference matchup that will begin at 7:15 p.m.

The most recent game for the Wolves was on Friday, Jan. 7, and was a road conference game against Mondovi. The Wolves defeated Mondovi 57-47 to improve to 3-1 in conference play. The biggest game of the season for the Wolves is on Thursday, Jan. 13, when they host visiting Durand, the top team in the conference standings that currently holds a 4-0 record in such games.

Similar to other teams in the area, if the Wolves want to win a conference title this year, the game against Durand is essentially a must-win contest. The key to the game will be Elmwood/ Plum City senior Luke Webb, who has quietly put together one of the best individual seasons in Pierce County.

For the 2021-22 campaign, Webb is averaging 18.7 points per game, 15.4 rebounds per game and 2.2 assists per game. He is the key to the Wolves’ offense and defense and when he plays well, the team typically wins.

Durand is objectively a good basketball team. They will game plan to take Webb out of the game as much as possible with double-teams and a unique defensive strategy. If the Wolves are going to win against Durand, Webb will have to get the ball to open shooters and those players will have to hit big -time shots.

The highly anticipated matchup between Durand and Elmwood/ Plum City is slated to begin at 7:15 p.m. on Thursday. 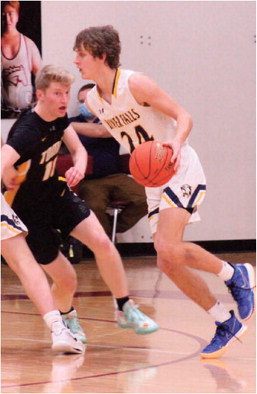 River Falls senior guard Michael Schurman runs the pick and roll with River Falls senior center Kaden Rowekamp during a game at the Menomonie Holiday Showcase. Schurman will be a critical part of the Wildcats’ run at another conference title.Photo by Reagan Hoverman