On Friday, Jan. 7, the Ellsworth boys and girls basketball teams hosted a doubleheader in which both teams suffered defeats. The boys lost the opening game against Osceola 60-50 and the girls lost the backside of the double- header 63-30 to Altoona.

It was a tough night for both Ellsworth Panther basketball squads. Starting with the boys, they began the Friday night action against the Osceola Chieftains, who came into the game with a 44 record including a 1-3 record in Middle Border Conference action. After Ellsworth got out to a 5-2 lead in the opening minutes, the Chieftains strung together a 7-0 run to take a 12-5 lead with nine minutes remaining in the first half. The Ellsworth offense struggled to overcome what was a tight, physical man-to-man defense throughout the first. The offensive struggles led to a 2814 halftime deficit for the Panthers.

In the second half, something clicked for Ellsworth. Head coach Jordan Petersen implemented a full-court press which forced Osceola to make mistakes and led to easy transition buckets. The Osceola lead, which at one point in the second half had ballooned to 19 points, began to melt away as the Ellsworth press became more impactful.

Perhaps the best illustration of the effective press came with seven minutes left in the second half. A steal by junior Jurell Gooden and a quick outlet pass led to a three-pointer by junior Lance Gipford to cut the Osceola lead to 10 points. The scoring run by the Panthers forced an Osceola timeout.

After more full-court pressure, Ellsworth trimmed the Osceola lead to five points (51-46) with three minutes remaining in regulation. The Panthers’ effort was nearly enough to overcome the 19point second-half deficit. However, missed three-pointers in the closing minutes left the comeback just short for Ellsworth. The Chieftains left Ellsworth with a 60-50 victory. After the game, coach Petersen spoke about the game.

“We knew it was going to be tough as far as two games in two nights,” Petersen said. “In that first half, we were kind of sluggish offensively but competed defensively and didn’t rebound well. In the second half, I don’t know if it was changing defense or what, but we definitely picked up intensity and I think the defense fed our offense at that point.”

Although the Ellsworth boys lost, perhaps the biggest positive takeaway from the game was Ellsworth’s effectiveness in the full-court press. Petersen spoke about implementing it after the halftime intermission.

“(The press) was something that I saw in the film that I thought we could take advantage of,” Petersen said. “I didn’t know at what point we wanted to do it while playing three games in one week. It probably should have been done earlier and I think it fed us.”

Even with the Friday night home loss, Ellsworth finished the three-game week with two wins and the lone loss to Osceola. The Tuesday and Thursday night games included victories against Amery and Barron, with scores of 38-34 and 63-47 respectively. Petersen spoke about both games and finally getting into the win column for the 2021-22 season.

“Amery was a grind-out game,” Petersen said. “We had a couple of starters out with sickness, not COVID, but just being sick, so we knew it was going to be a battle. We got some things going in the second half, changed defenses and it seemed like that fed us. In Barron, the offense was rolling. I stepped in the gym and I told some guys, ‘This is a shooter’s gym.’ We shot well that game and we moved the ball well. We played with good place, the ball swung and that fed our looks.”

With the two wins against Barron and Amery and the loss against Osceola factored into the overall record, Ellsworth is 2-6 for the season and is 1-4 in Middle Border Conference action. The next game on the schedule is Tuesday, Jan. 11, at home against Somerset. That game will begin at 7 p.m.

The Ellsworth girls also had a tough night on the court. For the girl Panthers, it seemed like everything that could go wrong did go wrong against the Railroaders of Altoona.

After struggling in the closing minutes of the first half, the struggles continued throughout the entire second half. The Ellsworth offense couldn’t get going, meanwhile, Altoona’s offense was firing on all cylinders. In the 18 minutes of second-half action, the Railroaders ran away with the game.

When all was said and done, Ellsworth had been defeated 63-30 and had dropped to 6-6 for the season, including a 3-1 record in the Middle Border Conference. Leading the charge for Ellsworth was Molly Janke, who finished with 12 points on 5-12 shooting from the floor. She also grabbed nine rebounds and had three assists. No other Panther had more than five points. After the game, head coach Jason Janke spoke about the tough week of basketball for his team.

“I’ll give Altoona credit,” Jason Janke said. “They came in and were very well prepared. Everybody stepped up for them and I can’t say enough about how well they shot the ball. Two games in a row things went really, really well for their team and we played I thought as poor as we could on Monday and we played worse tonight.”

Jason Janke is referencing the Monday night, Jan. 3 game on the road against Elk Mound, which resulted in a 67-45 loss for Ellsworth. Based on scores and overall results, it was likely the worst week of basketball that the Ellsworth girls have played all season. He again spoke about the loss to Altoona.

The final aspect of the Altoona and Elk Mound games that he spoke about was defending the three-point shot. In both games, the Railroaders and Mounders had great shooting performances from behind the arc. Jason Janke said at some point, they have to look in the mirror.

“(Elk Mound) hit four threes in a row during that game,” Jason Janke said. “But again, you can’t consistently have people have their best shooting nights and not have to look in the mirror. We have a lot of work to do and a big hill to climb.”

Despite the week of struggles, Ellsworth has a chance to prove itself as a serious playoff team if it can win a couple of games this week. The first is on Tuesday, Jan. 11, on the road against Baldwin- Woodville, a team that’s currently 9-2 this season and is in first place in the MBC with a 4-0 record. Then on Friday, Ellsworth hosts Osceola in another Middle Border game. Both games are scheduled to begin at 7 p.m. 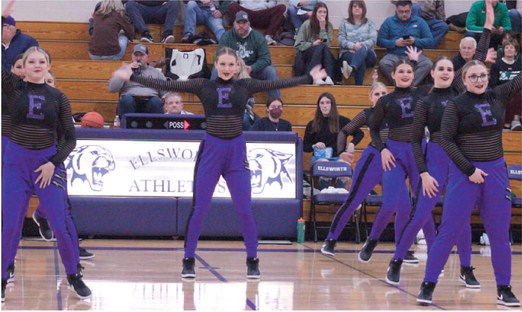 At halftime of both games of the double-header, the Ellsworth dance team performed for the crowd. Photo by Reagan Hoverman 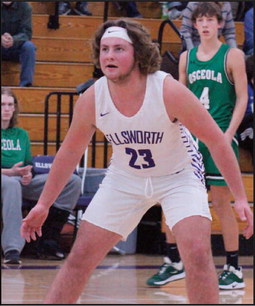 Senior Carsen Stockwell of the Ellsworth basketball team gets into position to play defense against Osceola. Photo by Reagan Hoverman