The next thing to do? Wait

I was a wannabe trapper while growing up along the banks of the Mississippi River. Muskrats were my game and I enjoyed the heck out of it. I made the best of my trapping turf which was limited to areas that I could reach on foot.

I studied under the direction of my dad who trapped the backwaters of the river. Ok, full disclosure, I was really an untasked assistant responsible for staying in the sled and out of trouble. My favorite part was always the excitement and anticipation as we approached each new set. That’s the draw for every trapper. When the trap was empty, the focus quickly shifted to the next trap and the growing excitement would build all over again. That’s the thrill: The expectation that the next trap will have something in it.

After I left home, I never figured I would trap again. I found myself back in the game mostly by accident. When I filled out my license application last year, I checked the box for a fisher tag. I never really thought about what it meant until I received a postcard in the mail informing me that I had been awarded a permit to trap a fisher. From there I followed the instructions and started studying up on the animals.

A fisher is in the weasel/martin family but is bigger than both and has an almost Teletubbytype head. They may have a seven-to-ten-mile home range and it can take two weeks for them to complete the rounds on their territorial turf. They are fierce for their size and don’t have any real predators. Fishers are the squirrels’ biggest enemy because they can easily climb trees to dismantle a squirrel’s nest for the chance at a meal.

The more I learned about the fisher, the more excited I got about the entire trapping process. I watched a friend set his box trap and I almost immediately got moving to gear up. The first stop was Fleet Farm to buy some conibear traps. The second stop was to the wood shop to hammer out the actual boxes that would hold the trap and the bait. The scent used to lure in a fisher was borrowed from Max and the first thing I learned was that you only leave that in the cab of your truck once. WHEWWWW that stuff isn’t called the “long distance caller” for no reason.

With traps in tow, I headed to the woods with already a pretty good idea as to where I was going to place them. Several fisher sightings this fall during the bow season made the first spot a no brainer and the other spots fell in line with encounters from past years. What was the next thing for me to do? Wait.

Didn’t get enough Dave this week? Visit “Outdoor Trails and Tales with Dave Beck” on Facebook for photos and video of Dave’s adventures. You can share your own photos and video with him there as well, or by emailing him at [email protected] Also, check out OTT content on Instagram @thepiercecountyjournal 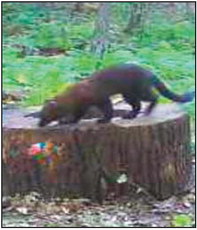