A early morning two-vehicle crash on Highway 29 in the Town of Wheaton past Elk Creek has resulted in non-life-threat- ening injuries to the occupants of a Dodge Ram 2500, the Chip – pewa County Sheriff's Department reports.

On Monday January 10 at approximately 6:33 a.m., the Dodge Ram 2500 failed to stop at a stop sign on 20th Street at Highway 29, instead proceeding northbound into the intersection. There it was struck by a straight truck that was eastbound on State Highway 29. The two occupants of the Ram 2500, Ger Xiong and Her Yang of Elk Mound, Wisconsin, were transported to an area hospital with non-life threatening injuries. The truck driver, Adbulahi Abdi of Oakdale, Minnesota, was not injured in the crash but was extricated, while the straight truck itself rolled on its side blocking both lanes of State Highway 29 eastbound. The Dodge Ram suffered extensive front damage and became disabled in the eastbound lanes of State Highway 29. The high way was closed for approximately two hours for the vehicle re- moval, with traffic rerouted on a frontage road and around the crash.

Having failed to stop at a stop sign early Monday morning in the Town of Wheaton, this Dodge Ram 2500 was traveling northbound across Highway 29 when it was struck by a straight truck heading eastbound, resulting in significant damage to the vehicle's front as well as highway blockage. Image courtesy of the Chippewa County Sheriff's Department.

A recent example of the potential consequences from slippery roads, taken outside the Stanley-Boyd High School at First Avenue. Photo by Joseph Back. 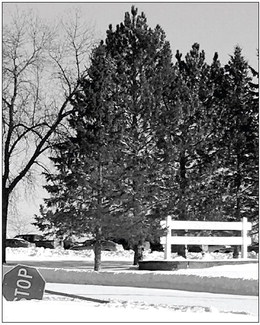