It may be just one part of a much larger and long-range plan, but that was hardly consolation for those set to be directly impacted by the closure of Newport Elementary, up for voter approval as part of the larger facilities plan this fall after the school board voted approve the plan April 21. With a 6 – 1 voice vote to approve the plan with Eric Tessmer the sole school board member voicing his opposition to longrange facilities plan, it next heads to district voters in a fall referendum to approved a general obligation bond for the $462.5 million projected price tag.

In the meantime and facing a projected 2,500 seat gap in terms of student enrollment districtwide the next 10 years, but also significant pushback on its plans for Newport Elementary, meanwhile, the long-range facilities plan up for board approval was proceeded by a lengthy explanation from the district of the process and time taken to arrive at the current long-range facilities plan as presented. Board chair Sharon Van Leer led the topic discussion out.

“8.1 is approval of the longrange facilities plan, presented by Kristine Schaefer, assistant superintendent,” board chair Sharon Van Leer said to announce the agenda item. Following a greeting of the school board and those present, Schaefer started out her presentation of the final plan with a timeline.

“So many times as a district when we do large projects like this we get feedback that we’ve either gone too fast, or we’ve gone too slow. We do take that into consideration, and we have worked through the process to engage community members, staff, throughout the entire process to make the best decision that we can with the data that we have.” Then using a timeline to show the process had started in 2015 with a bond question to build Oltman Middle School, a second bond question not approved at the time. That second bond question was for additions and improvements to existing high schools along with upgrades to elementary schools.

The need not going away in the meantime, the board had approved a long-range facilities planning process in October 2018, Schaefer said, along with creation of a steering committee to collect and review data, which took place from March to August of 2019. From June to September of 2019 the school district had consulted with principals and other staff along with stakeholders. In August of 2019, a task force “of 35 plus people” had been created to review enrollment projections, building capacity calculations, and community growth plans, Schaefer went on. In February 2020 Focus groups were held with district advisory groups of staff and city decision makers to review construction options.

“Those advisory groups were held with lots of parents and community members in our district,” Schaefer said. Additionally, school construction options were finalized in February 2020 for community review, with COVID-19 then putting the entire process on hold “for an entire year,” Schaefer said. With that the final runup to what was being asked at present started back up in March 2021. Leadership and steering committees had begun to regroup and review new data, with community growth continuing throughout the pandemic. From March to September 2021 the facility staff had consulted “with principals, department leaders, program providers, and other stakeholders” along with cities to review residential building data and projected housing developments.

Following this in November 2021, the school board had approved a guiding change document that guided facility planning.

With the long-range facility team updating the school board in November and original task force composed of staff and community members brought back as well, the design team and leadership committee had revised previous plans to accommodate ongoing growth and new facility and student needs in December 2021. From January January of 2022 the team had narrowed down three working options with enrollment data and timelines shared with the school board and original task force for their feedback.

With the above preliminaries covered and many parents in attendance at the April 21 board meeting, it was time for the plan details, beginning with the elementary level and progressing onwards: Elementary Plan Overview

• closure of Newport Elementary for transformation to an early learning center

• New Crestview Elementary building in a central district location with repurposing of current Crestview building for the alternative high school.

• New Pine Hill Elementary building to be built on-site, and

• current middle schools increase to approximately 1400 students each, and

• expansion of cafeterias and kitchens

• Site redesign at Park and Woodbury High Schools to improve traffic flow and increase pedestrian safety, with the Park High School campus to include portions of the current Crestview Elementary campus, and

• construction of a satellite transportation space for additional school bus parking, and

• the purchase of 120 – 160 acres of land for future use Put together the cost estimates and they add up to a cool $462.5 million. With that it was into approval of the 10-year facilities package, requested by Schaefer.

“At this time, Sharon Van Leer, Administration is requesting approval of this 10-year facilities package,” she said.

“Thank you,” board chair Van Leer answered. “Can I have a motion to approve the long-range facilities plan as presented?” She asked, first seeking board comments but stipulating these were not questions. None being given, the motion was made.

“So moved,” Louise Hinz offered, being seconded by board member Katie Schwartz. With a sole ‘nay’ vote from member Eric Tessmer the board approved the long-range facilities plan as presented to it April 21.

The audio was briefly cut as parents left the meeting unhappy at the board’s decision.

Following the restoration of sound, the board heard from ISD 833 director of finance and payroll Dan Pyan.

“Superintendent Nielsen, with the approval of the long-range facilities plan, the school board has investigated the facts and hereby finally declared as necessary and expedient to issue general obligations bonds—building bonds, for acquisition and betterment of school sites and buildings. It’s calculated the cost of this package is 462 million, 542 thousand dollars.” Then calling for a bond of $462.66 million to include the cost of bond issuance and interest, Pyan noted that a resolution was required by the school board along with submission to the state department of education for review.

“Is there any discussion or comment?” Board chair Van Leer asked, then moving to seek a roll call vote after motion by Pat Driscoll and seconded by Louise Hinz.

All school board members voted in favor of the bond referendum, to go before voters in a special election on August 9, 2022. The tax impact for property owners onto referendum ranges from a projected $191 annually for a $200,000, all the way up to $527 annually for a $500,000 home. Should the fall bond referendum fail to pass, the next election to return the issue to voters would be in February 2023. With the long-range facilities plan out of the way, it was into the revised budget for 2021 – 22. Check back next week for more on that and other meeting items. 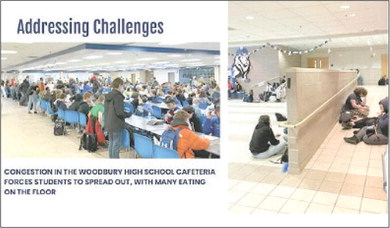 With the long-range-facilites plan facing pushback from parents with regards to plans for Newport Elementary, assistant superintendent Kristine Schaefer offered many visual examples of challenges to be addressed by the district in her presentation seeking board approval of the plan April 21.Images from long-range families plan presentation.

Latest News
News
Norris Square hosts service recognition for Ray Weisner Tuesday, May 24
Norris Square off 80th Street South and Highway 61, was the scene Tuesday for a recognition of service event for World War II naval aviator and offic...
News
Highlands Park to see free movies this summer
What’s free, family- friendly, and coming to Highlands Park this summer? Movies in the Park CG, that’s what. Organized by Monique Garza of buywit...
News
Introduction of Bison at Belwin at Warden’s House Museum June 2
The Washington County Historical Society is excited to announce that Susan Haugh, Program Manager of Belwin Conservancy, will be at the Warden’s Hous...
News
Moment
“Chickens, ducks and food trucks. What do these three have in common?” That was Mayor Myron Bailey’s topic of choice for the Mayor’s Moment in May...
News
Time
BY BEA WESTERBERG Bloom, bloom, bloom “You never know how strong you are until being strong is the only choice you have”. A poster available on Am...
Obituaries
Obituaries
OBITUARIES
Obituaries
OBITUARIES
Obituaries
Warren Quade 1940-2021
Warren Harold Quade of Prescott Wisconsin passed away on November 6th, 2021 at the age of 80. Warren will be deeply missed by his family and friends. ...
Obituaries
OBITUARIES
Kent Petrie 1947-2021 US ARMY VETERAN Kent Richard. Petrie, age 74, af Callage drove,, passed sway peacefully on Sunday, August 15, 2021. K...
Obituaries
Obituaries
Loren Hagness 1941-2021 Loam Hipoa, age iHj at' Cottage Grove died unexpectedly on June 30, 2021. Loren Arthur Hagness was hum Janu...
Read Our e-Edition