City of Cottage Grove Economic Development Director Gretchen Larson presented to the Economic Development Authority on a variety of topics Tuesday morning, including the annual DARTS Annual Report, with DARTS an acronym for Dakota Area Resources and Transportation for Seniors, the name shortened in 2008 to its present acronym.
News
Annual report of pro-senior organization shared May 10

The acronym DARTS stands for Dakota Area Resources and Transportation for Seniors, a non-profit organization dedicated to helping seniors in the area. The full name was shortened to the acronym in 2008.

Presenting on the DARTS Annual Report with other agenda business was Cottage Grove economic development director Gretchen Larson, who took some time to highlight key aspects. First though, there was DARTS itself. What was—or is—it exactly? Larson had the quick summary.

“We met with DARTS,” Larson said. “They submitted their annual report to the city. They had 554 Onsite Services, and those are where they go to the single-family homes and help with snow removal or put grab bars in your shower,” she said, adding that the record of DARTS was “darn good.”

Among details for the DARTS Annual Report were a total of 1,714 people served, 6,700 volunteer Hours from 643 volunteers (dividing out to just over 10 per volunteer on average), and the pie chart report for revenues and expenditures overall.

“Their revenues exceeded their expenditures,” Larson noted, saying this showed they were operating in an efficient manner. With total operating revenue of $2,136,308 and total operating expenditures of $2,059,984, DARTS had a positive balance of $76,324 after the year 2021.

“We are going to be meeting with them again in a few months,” Larson said of the non-profit, “just to kind of check back in.”

As to the other details of the May 10 EDA meeting, check back next week. Returning to DARTS for a moment though, these are some of the services the organiza- 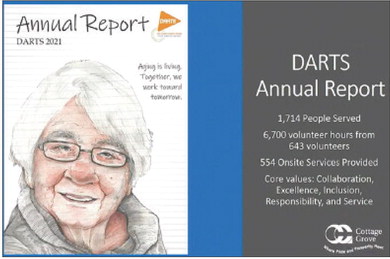 The Cottage Grove Economic Development Authority (EDA) heard the DARTS Annual Report at its May 10 meeting. DARTS is an organization dedicated to helping seniors, with more information at https://dartsconnects.org.

Latest News
News
Norris Square hosts service recognition for Ray Weisner Tuesday, May 24
Norris Square off 80th Street South and Highway 61, was the scene Tuesday for a recognition of service event for World War II naval aviator and offic...
News
Highlands Park to see free movies this summer
What’s free, family- friendly, and coming to Highlands Park this summer? Movies in the Park CG, that’s what. Organized by Monique Garza of buywit...
News
Introduction of Bison at Belwin at Warden’s House Museum June 2
The Washington County Historical Society is excited to announce that Susan Haugh, Program Manager of Belwin Conservancy, will be at the Warden’s Hous...
News
Moment
“Chickens, ducks and food trucks. What do these three have in common?” That was Mayor Myron Bailey’s topic of choice for the Mayor’s Moment in May...
News
Time
BY BEA WESTERBERG Bloom, bloom, bloom “You never know how strong you are until being strong is the only choice you have”. A poster available on Am...
Obituaries
Obituaries
OBITUARIES
Obituaries
OBITUARIES
Obituaries
Warren Quade 1940-2021
Warren Harold Quade of Prescott Wisconsin passed away on November 6th, 2021 at the age of 80. Warren will be deeply missed by his family and friends. ...
Obituaries
OBITUARIES
Kent Petrie 1947-2021 US ARMY VETERAN Kent Richard. Petrie, age 74, af Callage drove,, passed sway peacefully on Sunday, August 15, 2021. K...
Obituaries
Obituaries
Loren Hagness 1941-2021 Loam Hipoa, age iHj at' Cottage Grove died unexpectedly on June 30, 2021. Loren Arthur Hagness was hum Janu...
Read Our e-Edition