The 133rd Airlift Wing has received their first C-130 Hercules with an updated eight-bladed propeller. One Cottage Grove resident, Master Sgt. Leon Peterson, is an aircraft maintainer from the 133rd Maintenance Group and will be working on the new aircraft.

The Wing is currently in the second phase of the modernization process, which includes transitioning the C-130s from four-bladed propellers to eight-bladed propellers. The eight-bladed propellers will deliver more power and efficiency, while reducing maintenance. They are also helpful in cold weather and arctic operations, due to increased thrust for takeoff and climb-out. The completion of this phase is project to be the end of this fiscal year in September 2023.

“Modernization ensures we have the right forces, infrastructure, training spaces, and systems for our current and future missions,” said Cleet. “As our challenges and adversaries change, we require forces, equipment, and training to ensure our national security.” The C-130 is a legendary cargo aircraft known for its tactical abilities; it can operate from rough, dirt strips and is the prime transport for airdropping troops, equipment, and aid into hostile areas, as well as providing medical evacuations. In Minnesota, the cargo aircraft are often used to assist with natural disasters and state emergencies. Over the last 51 years the Wing has flown three different models of the C-130 aircraft. The current model, the C-130H3 Hercules, has been with the 133rd Airlift Wing since 1996. Since the Wing started flying the C-130 in 1971, crews have logged more than 213,000 flying hours. To put that into perspective, that would be 27 years of flying non-stop. 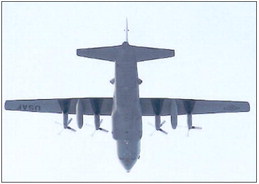 The new eight blade configuration on the C-130 will replace the old four blade propellers, as on this flight seen over Grey Cloud Island on February 2 of this year.Photo by Joseph Back.