Following an appeal on page six of the May 12 edition and provision of color photos to help with bird ID, we can now start providing bird profiles of our south side residents, thanks to help from Doreen, a bird banding recorder along with others at the Carpenter St. Croix Nature Center. First up, the Caspian Tern.

Starting out our bird review for the current week is the Caspian Tern, sighted in Grey Cloud Channel recently and with the scientific name Hydroprogne caspia, according to the bird website www.audubon.org.

Present on five continents and larger than many gulls, the Caspian Tern reaches breeding age after turning three years old, with a potentially long life should it survive its first winter. The oldest known Caspian Tern in the wild was recorded to live almost 30 years! Usually laying from one to three eggs per breeding cycle, this bird can lay from four to five.

Living in colonies with a long teenage period during which it stays with its parents, the Caspian Tern uses an “everybody on board” philosophy to raising its young. While both parents contribute to incubation, it is noted that mom (the female) “may do more,” with hatchlings after 20 to 22 days.

Making its nest on firm ground, mom and dad both bring food to the young, while a young Caspian Tern takes its first flight within 30 to 35 days from greeting the sunlight. Remaining with the colony, courtship involves the male flying low over the colony with fish (the bird’s main food) and the female following. The male then feeds the female.

With breeding taking place inland, the Caspian Tern moves south and to the coasts with colder weather, while warming temperatures on a global scale are expected to expand its range into northern Canada, and the bird can also be found in northern South America.

Also up for ID this week is the Brown headed cowbird, with a scientific name of Molothrus Ater. Following cattle in the modern day, the survival and reproduction strategy of the Brown-headed cowbird is somewhat unique, if successful: use great amounts of energy to produce from 40 to 70 eggs per breeding season, then pawn these off eggs on other bird species to hatch and raise for it.

Said behavior, which gets the Brown-headed Cowbird a bad reputation for ‘heavy parasitism’ in some quarters, has nonetheless paid off for the species itself, as the Cowbird “occurs abundantly from coast to coast” according to audubon. org. With “farms, fields, prairies, wood edges,” and river groves among its favored habitats, the cowbird is an insect eater, foraging by walking on the ground and feeding on that the livestock kick up.

Prior to cattle herds it was associated with Bison herds, for similar reasons. Highly successful as a species in the present, success for the Brown-headed Cowbird (Molothrus Ater) has come at the expense of other bird species, due to its somewhat nest-wrecking behavior of having other species raise its young. At last count per Audubon, Molothrus Ater was known to have laid its eggs in the nests of 220 species, with 140 of these species known to have risen to the challenge of helping raise someone else’s clutch. With territory nationwide, Minnesota is among the breeding grounds of Molothrus Ater. Fed by the nest they hatch in, brown-headed cowbirds leave their temporary home after just 10 to 11 days. Skipping a nest of their own, they then repeat the cycle, with Florida and the outlet of the Colorado River on the Gulf of California as popular wintering destinations, along with the Gulf Coast south of Texas. But among the potential long-term dangers of making other bird species central to your survival strategy though?

The other species own ability to adapt to changing environmental pressures, being that they must themselves survive, in order to be of help. A somewhat dicey survival strategy for the Brown-headed Cowbird, but one that appears to have paid off—so far. 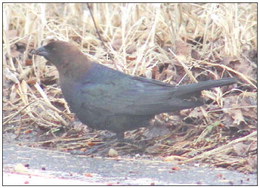