The River Oaks Golf Course Improvement Plan as contained in the May 18 consent agenda includes a lot of sprinkler heads, or a combined 800, to be exact. Image from May 18 City Council packet.
News
Council consent agenda details trunk sewer work

The kayaks at Hazen P. Mooers Park should soon be available to rent. With new stickers and other requisite maintenance out of the way, the fun begins May 24 in south Cottage Grove. Registration can be made at www. ipaddleport.com. With rates of $10 per hour for single and $15 per hour for tandem, more information under the following dropdown menu sequence at www.cottagegrovemn. gov:

• Kayak Rental With that little public service announcement out of the way, it’s into City Council business from the Wednesday, May 18 Council meeting.

First though and with respect to the ongoing fight against PFAS, important well testing contact information and health data are appended to the end of this article. Now, back to the May 18 Council meeting.

Beginning the consent agenda review, the One Family 2nd Annual Hmong Memorial Sports Fest, is an event to take place Saturday May 28 and Sunday May 29 at Kingston Park in Cottage Grove. Among the activities planned for the Fest are Women’s Football, Men’s Football, Basketball, Men/Women’s Volleyball, and something called “Corn Hole.”

Readers can also come to watch and cheer the teams on. A group Facebook page is kept at “Ib Tsev Need One Family.”

With the verdict still out as of press time and a long way to go in review of the details, it’s on to item three on the May 18 consent agenda: a Safe Assure Service Agreement for $8,746.17 to include monthly training, attendance at Safety Committee meetings, “mock OSHA inspections,” and website host for the city’s safety data sheets.

“The City has been using Safe Assure as our workplace safety consultant for many years,” HR Manager Joe Fischbach wrote the Council. With the contract set to renew, the city has designated Jennifer Levitt to act as City representatives for the training and other services under the agreement. So what will Safe Assure do for the City and its employees?

In a word, train—but more specifically train in a number of areas which statute requires employees to be so trained, including but not limited to bloodborne pathogens, confined spaces, “control of hazardous energy,” emergency action plan, and ergonomics. With the contract for training to satisfy employee requirements for different city jobs, its on to the fourth consent agenda item, a master partnership contract between the State of Minnesota and City of Cottage Grove, the city acting through its Council and the State acting through the Commissioner of Transportation.

“Each party wishes to occasionally purchase services from the other party, which the parties agree will enhance the efficiency of delivering government services at all levels,” the contract states in part, enabling the City Engineer to negotiate work order contracts pursuant to the Master Contract without further Council Approval, Coming in fifth for the consent agenda rundown is a budget increase for two single-axle dump trucks from $470,000 to $638,569. Said dump trucks will replace unit numbers 31-4006-06 and 31-4007-06. The requested budget increase as such is due largely to inflation, as “current prices have increased dramatically since the budget numbers were obtained in June of 2021.”

Budget conscious and mindful of the need to mitigate costs, then, staff proposed to not trade in unit 31-4007-06 but keep it on the 14th plow route in the City, as a relatively inexpensive way to “to add a 14th route, rather than purchasing a new truck for $320,000 or more, in 2023.” Unit 31-4007-06 had originally been planned for trade-in at an estimated value of $64,000, prior to the onset of inflation. Additionally, and with $1.34 million in the Equipment Replacement Fund as of December 31, 2021, “funds are available to cover the additional expenses of the trucks,” per staff memo from Ryan Burfiend to the Mayor and City Administrator.

Next in the list of non-controversial consent agenda items meanwhile, is the County Road 19A/100th Street Realignment. So what are some details on that?

For those, we turn to Resolution 2022-082, authorizing the city to apply for a Rural Surface Transportation Grant.

Alongside new growth in the City’s Industrial Park for 2021 and 2022 following approval of a final study in April 2021, is the fact that “the residential development in this same area (south Cottage Grove) is also seeing the extraordinary growth of four anticipated single-family development projects by 2025 that will total nearly 1,000 additional residential units” to include a variety of housing stock and tiers to choose from, whether single family lots, “smaller lots for active adults,” or senior twin homes and apartments., the City pledging to meet the local funding requirements of said project if awarded the grant.

Skipping over the more or less routine raffle permit (for October 8), the next item for this our review is the South District Storm Sewer Project.

Extending from Ideal Avenue South in an eastward direction and budgeted at $3,930,000 from the Storm Sewer Area Fund, the project is not without limits.

Being made aware on April 28 of this year of the impact that a new health based value for perflourobutane sulfonate (PFBS) would have on the city’s water system, upcoming quarterly testing by MDH raises the possibility of a well shutdown, leading staff to recommend that work on the Pine Hill Water Tower be postponed, as not having the tower in service (due to maintenance) could cause issues with the low-pressure zone (for groundwater) in which Pine Hill happens to be. Postponing the maintenance contract to leave the Pine Hill Water Tower in service, will thus be to the City’s advantage, should quarterly testing lead to a well advisory. 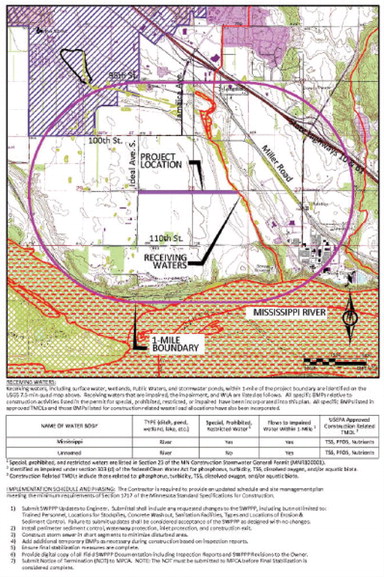 Above, a big picture view of the trunk sewer construction area along with surrounding features.Image from May 18 City Council packet.