As to the details of the amended and reinstated TIF District for the development, it was determined to increase the TIF to $12 million over eight years, the prior agreement being $8.311 million over six years.

TIF Districts are meant to encourage development by offering tax incentives to businesses. In NorthPoint’s case, it will help with road construction as part of the development along 100th Street, with the TIF meant to “pay back” some of the costs for this. The amended and reinstated TIF agreement for $12 million over eight years, was approved as rising inflation has reportedly increased the costs for North-Point to develop its Logistics Park in the south Cottage Grove. With NorthPoint further pledged to create 1,870 full-time jobs for the area as part of the agreement, there was more to report on the employment front generally from the May 10 meeting.

Among the Beige Book details, Larson reported was that there had been a sudden and steep rise in prices for certain raw materials after a brief slowing, a rise attributed to the onset of the war in Ukraine. NORTHPOINT

Also among recent economic news from the Beige Book for district nine encompassing Cottage Grove, was that retail fuel prices had increased briskly, while consumer spending grew moderately along with commercial construction.

“Moving on, we attended the Chamber Community showcase event,” Larson said. “A lot of folks were interested in what’s going on in the city.” A reported 650 to 700 people were in attendance, with many showing interest in the development happening in Cottage Grove. “Mayor Bailey and Council member Dennis were there to help showcase all the things that were happening to the community,” she said. There was more though.

“On May 5 this past Thursday we attended the Basic Needs ribbon cutting,” Larson said, adding, “that was a really nice event.” Stating that Mayor Bailey “had done a really nice job” of showcasing how long Basic Needs had been in the area and what it did, Larson then shifted into updating the EDA on companies the city had either set meetings with or else was looking to set meetings with.

Among the companies mentioned and deemed as “no surprise,” were Buxton, Retails Coach, Co Star, while Larson also noted that a development group named River Caddis from Michigan as being interested in Cottage Grove.

As to commercial remodel projects, Larson reported that permits had been issued for Ellie Family Services in the former Custom One Homes office next to Junction 70, along with an expansion for Dunn Orthodontics and permits for CompCare Urgent Care and Van Meter Electric, with plans reviewed and approved for an interior remodel of the Starbucks at 80th and East Point Douglas Road to make the kitchen bigger for storage.

Then there was the Pizza Ranch update.

“Pizza Ranch,” Larson announced for a slide in her May 10 presentation. “This is on there just to remind you that construction has been pushed back to the fall of 2022. I know a lot of folks are interested in getting it up and running, but it’s going to take a little more,” she said.

As to the South Business Park, there were two chief items outside NorthPoint, these being the Leafline Labs expansion and Hemingway Industrial to consider.

Once completed the Leafline Labs expansion will total 137,440 square feet of space, with a conditional use permit and site review in the mix. As to Hemingway Industrial, Enclave Development had applied for a site plan review, the proposed two-building warehouse to come at 97th and Hemingway to consist of 240,000 square feet.

In housing news, meanwhile, Larson reported that developer D. R. Horton had applied for a zoning amendment to rezone property across from the Washington County Service Center along Keats from AG-1 Agricultural Preservation to R-4 low density residential, with D. R. Horton also applying for a preliminary plat with 80 single-family homes and four outlets.

Due southwest, another proposed development planned by Summergate Development to be tentatively called Preserve at Prairie Dunes, would abut the Grey Cloud Dunes SNA on the east, creating 161 single-family homes plus 9 outlots. Larson reported that Summergate had applied for a preliminary plat for the proposed neighborhood.

Also touching on a proposed 207-lot development of single family homes by US Home, LLC to be called Graymont Village.

Coming up June 2, meanwhile, was the All Commissions meeting at River Oaks Golf Course, scheduled to start at 5:45 p.m.

“There will be roundtable discussions there answering questions and helping the Commission members advocate for the community and help all of us out,” Larson said of the meeting to be composed of members from the City’s many different commissions. 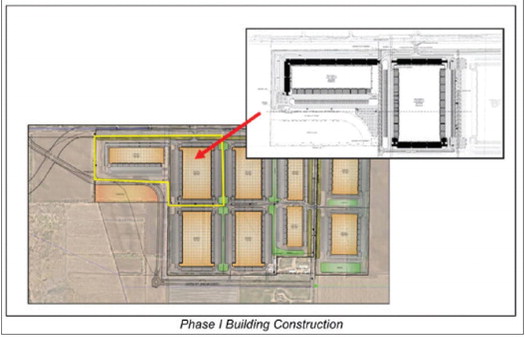 Northpoint will hold a groundbreaking May 26, with phase I of development shown above. Image from May 10 EDA packet.