The medal pictured on the top is the Distinguished Flying Cross. Below that is the Purple Heart.Pictured to the right is Lieutenant Raymond Weisner. Submitted photos
News
Norris Square hosts service recognition for Ray Weisner Tuesday, May 24

Norris Square off 80th Street South and Highway 61, was the scene Tuesday for a recognition of service event for World War II naval aviator and officer Ray Weisner, whose service record includes over eight medals and honors. Tom Reamer, a veteran and resident at Timber Hills in Inver Grove Heights, lead the ceremony entitled “No Greater Love, Honoring Our Vets” May 24.

Enlisting as of September 10, 1942 and in active service from January 12, 1943 through November 27, 1945, Weisner earned many honors for his service, becoming a certified naval aviator and flying the Grumman F6F-5 Hellcat aircraft. Lieutenant Weiser had 100 straight landings on aircraft carriers without a single wave-off. Shot down July 25, 1945 and sustaining a head injury during the Third Operation over Japan, Weisner was rescued by a Patrol Bomber and taken to the USS Pine Island, a medical ship.

On August 1, 1945, he received orders to return to the USS Essex Aircraft Carrier.

the Purple Heart, Distinguished Flying Cross, American Campaign Medal, Asiatic Pacific Campaign Medal, Air Medal, Presidential Unit Citation Ribbon, Philippine Liberation Medal, and World War II Victory Medal. With such a long list, a view into at least some of the awards and what they represent is in order this Memorial Day. First up, the Purple Heart.

Awarded to members of the armed forced of the U.S. or civilian nationals who are wounded by an instrument of war in the hands of the enemy, the Purple Heart is a mark of valor. Should the person meriting the Purple Heart die as a result of their wounds, the award is posthumously given to the person’s family. Next is the Distinguished Flying Cross.

Composed with two large white stripes on either side with a red stripe in the center bordered with white on a blue background, the Distinguishing Flying Cross features a four-propeller insignia placed over another cross to the back.

Awarded to those U.S. military personnel who show extraordinary achievement and heroism with operations during flight “that are not routine,” the Cross is a mark of distinction to those who wear it.

Next on the partial list of awards and decorations awarded to Weisner is the American Campaign Medal.

Awarded to any member of the Armed Forces who served in the American Theater of Operations from Pearl Harbor to March 2, 1946, the American Campaign Medal was even sometimes awarded while in combat with the enemy. Also on the list of medals Lieutenant Weisner merited, meanwhile, was the World War II Victory Medal, awarded to those with service in the U.S. Armed Forces from Pearl Harbor to December 31, 1946.

Mustered out of service in 1945, Weisner served his country with heroism. oving that. Please fill me in if I have that wrong! 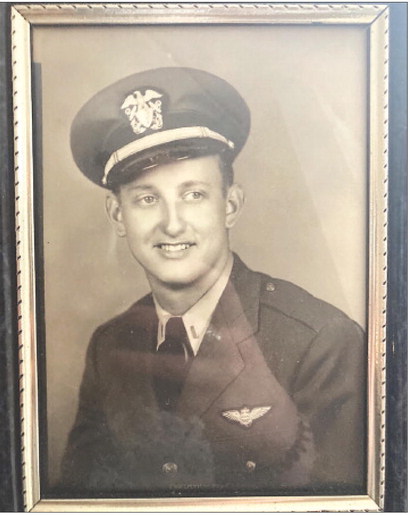