Nuclear power generation. Done right and in a controlled environment, it brings light and electricity to homes. If things go wrong meanwhile, it can be dangerous, or even deadly. With Prairie Island at Red Wing less than 20 miles away as the crow flies, the fallout should something go wrong with the reactor is no distant nor dismissible matter.

As to Prairie Island, Cottage Grove is one of two sites designated in the event of a radiological release, the other being Wabasha to the south. With no present release to worry about, but aiming to be prepared should the unexpected happen, Cottage Grove Police and others put together a preparedness drill May 25 at Park High School.

Among the tasks after an event at Prairie Island would be processing those coming from the site of an event. Devices like that shown above help achieve this by detecting if someone has been exposed to radiation and needs additional help or can go on their way. Image courtesy of police captain Gwen Martin. NUCLEAR

“It’s very much like walking thorough a metal detector,” Martin said of the vehicle and person monitors that would detect if people had been exposed to radioactive materials. If someone was, it would be off to the locker room for decontamination. Cottage Grove fire chief and deputy public safety director Rick Redenius. added more on getting the process started for people to come.

“Our job if an emergency is declared at Prairie Island is to bring two trailers, stored at our Fire Station 3 in East Cottage Grove and owned by the Minnesota Department of Homeland Security and Emergency Management,” Redenius said of the fire department. “These trailers hold all the equipment needed to set up the reception center. Our staff would off load the trailers and then as staff from different agencies began to arrive, they would get their equipment and begin to set up their work stations inside and outside the high school. We are generally the first group to arrive and begin the initial 12-hour work session if it is needed that long,” he said. Though not direct responders for an incident at Prairie Island itself, Cottage Grove firefighters would nonetheless wear protective gear, as explained by Redenius.

“The gear or protection used by workers at the reception center is generally dependent on what position is held at the reception center,” he said. “We are involved in EMS, vehicle inspections, and vehicle decontamination.” Both staff function and incident severity would determine what gear was worn, Redenius said.

“The severity of the medical incident and the amount of radiation exposure would dictate the level of protection EMS personnel would wear,” said Redenius. “Vehicle Inspections staff would generally wear their department issued turn out gear to provide them protection. Vehicle Decontamination staff at this station would be wearing full Tyvek suits to prevent splashing of washing onto themselves that may be contaminated.”

With practice sessions taking place every two years, Cottage Grove Police and Fire aren’t the only ones involved in making sure things go smoothly at Park High if needed as a reception center. Other agencies involved in regular safety drills include Washington County Emergency Management, the Washington County Sheriff’s Department, several state agencies related to health and safety, the Minnesota National Guard, and the Southeast Metro Amateur Radio Club, according to Redenius. Practice sessions every two years isn’t all the above departments do.

“We do practice sessions every other year and we have what is called a FEMA (Federal Emergency Management) Drill the opposite years,” fire chief Redenius said. “The FEMA drill is a scored drill where members from FEMA come and evaluate our setup and processes to make sure we are meeting the standards set for reception centers.”

With the reception center set up, the routine would then consist of people coming in, being registered, going through the monitors and/ or decontamination if needed, and to then be on their way. During the time that Cottage Grove personnel are staffing the reception center, Hastings serves as a mutual aid partner, helping the city meet needs elsewhere as the reception center is being set up.

“They are our mutual aid partners,” Captain Martin said of Hastings Police and EMS. Following a set up period in which local personnel would staff the site, state personnel would then come in and take over the reception center. Once that happened, Martin said, the state would then decide when to shut the site down. Meanwhile, the steam turbines continue to turn down at Prairie Island, helping to power the region.

Cottage Grove Fire was on the scene at Park High May 25 as local law enforcement and other agencies practiced putting up a reception center, which Park High is designated as in the event that anything should happen at nearby Prairie Island. Image courtesy of Cottage Grove Police Facebook page.

Seen towards sunset last Friday from atop Memorial Park at Red Wing, the Prairie Island Nuclear Generation Plant with steam and containment structures is backed by water towers representing many different communities, and extending far beyond the site itself. The reactor at Prairie Island is a Pressurized Water Reactor, with control rods used to keep the nuclear reaction in check as steam is produced to spin turbines and power the area. The water in the reactor itself and that released as steam, do not mix. Photo by Joseph Back. 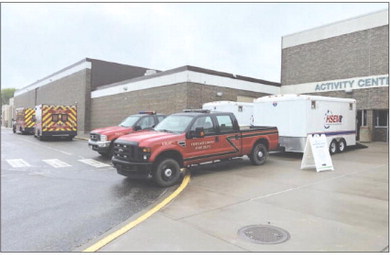 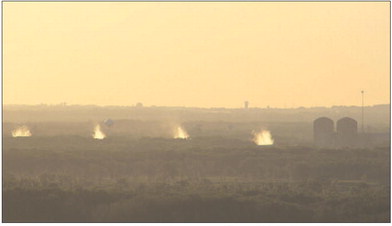