Back this year after taking a break due to the pandemic, Strawberry Fest 2022 stayed true to its comeback theme: “Berry Nice to See You Again!”

With Strawberries for sale at the information booth from Afton Apple, those who missed a chance to get the sweet treat are nonetheless in luck, as strawberries are currently in season at Afton Apple, located on 90th Street South.

But while strawberries grow best in well-drained soil where they can spread out their extensions to form a new plant, the Strawberry Festival itself took place at Kingston Park, with a parade Saturday down Jamaica Avenue and Indian Boulevard.

Over at Kingston Park, meanwhile, a carnival and several business vendors were present, the vendors in tents and the carnival up a short walkway.

Among the many vendors present was Charlie Umhoefer of Lincoln Apparel, ethically sourced clothing that celebrates Abraham Lincoln.

Also among those present Friday at the Kingston Park Strawberry Marketplace on Friday was Meredith Nett, showcasing potted plants with catchy sayings, including “I think I have enough plants—no one ever.” Just next door to Nett was a booth with magnetic key chains, while henna (temporary tattooing) and karate were also among the many Marketplace offerings available for Strawberry Fest goers to consider.

Down at the information booth, Cottage Grove native Joan Klossner was present for the group Lost K9 . The COVID-19 pandemic had created a situation in which landlords couldn’t enforce ‘no pet’ policies with tenants, but this was now changing. The result—which Lost K9 sought to address—was the many homeless pets as a result of the fallout, as well as generally.

Making it through the heat with innovation, meanwhile, Xcel Energy was passing out hand-powered fans to escape the heat, while up at the carnival Strawberry Fest goers could enjoy cheese curds, cotton candy and black raspberry twist cones, among other food options, with the Ferris wheel and Tilt-AWhirl also on site.

For those who arrived later and found parking difficult at Kingston itself, nearby Grey Cloud Elementary and its parking lot provided overflow parking space. Speaking of which, there were schools booths, including one for those not happy with Newport’s proposed closure.

“We don’t see this ending on August 9th,” Newport resident and city council member Marvin Taylor said as he stood with parent Nicole Kohler, whose children go to Newport.

Under a current long-range facilities plan to go before voters for bond approval August 9, Newport Elementary will close and its students be sent elsewhere, while the building will be turned into an early childhood center for the district should the $462 million referendum pass district voter approval. So what might those unhappy with Newport’s proposed closure want?

“What we want is conversations,” Taylor went on, with signs to “Demand a Better Plan 833” and Facebook group of the same name currently forming. “To talk about what a better plan might look like.”

As to the school district itself, there were also signs, one of them down at Grey Cloud Elementary.

“Vote Bonds for Buildings,” the large print said, with smaller print below identifying the school district as preparer and payer for the message, but without circulating this “on behalf of any candidate or bond question.” Signs were present at Pullman Elementary and Nuevas Fronteras as well, also on school property. Meanwhile back at the parking lot, the school aside took on a third angle, with flyers representing Cross River Charter School of St. Paul Park placed in car windshield wiper blades, and notifying residents of “a private school atmosphere in a public school.”

As to the parade on Saturday, there were many entries, including floats from Cottage Grove, Woodbury, River Falls, Hudson, and elsewhere with each communities ambassadors. Also taking part were the Cottage Grove VFW, entries like Dance by Kris (website: www.dancebykris. com) and Locally Grown Theater were also present, the latter with web presence at locallygrowntheatre. org. Not to be left out of festivities, meanwhile, politicians and political candidates. Among those making an appearance at the parade on Saturday were council members Steve Dennis and Justin Olsen, Karla Bigham (a candidate for Washington County commissioner), Minnesota State Senate candidate Tony Jurgens, county attorney candidate Kevin Magnuson, Minnesota House candidates Shane Hudella and Tina Folch, Minnesota State Senate candidate Tom Dippel, and U.S. House candidate Tyler Kistner—the last in Distirict 2, currently held by Representative Angie Craig.

With live music throughout the weekend, heat to spare and a coronation at Oltman Junior High on Monday night, Strawberry Fest 2022 is officially in the books!

Joan Klossner of Lost K9 was at the information booth, the group maintaining a Facebook presence at Lost K9. “We help rescue your lost dog!” the page says. Photo by Joseph Back. 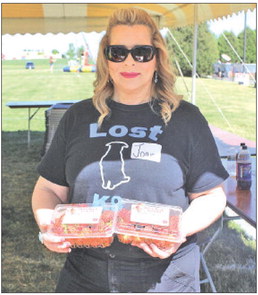