News
The stories of bridges

I’ve always been fascinated with bridges, ever since as a youngster our family drove across the Mackinac Bridge for the first time.

At the other end of the spectrum was a twospan iron truss bridge that opened in 1896 that crossed the Black River near North Bend, Wis.

By the time I was old enough to drive in 1980, the roadway was covered with wooden planks which rumbled every time you crossed.

But it was a convenient shortcut between our farm and my then girlfriend’s (now wife Sherry) farm near Mindoro. I crossed that bridge on a late Sunday evening and was surprised to hear on the news the next morning that it had collapsed later that night. I learned later it went down after being struck by a driver.

There also are a series of bow string bridges along the McGilvray road that cross the swampy backwaters of the Black River connecting La Crosse and Trempealeau counties – once a major highway route. Five of those bridges were restored and preserved along a walking trail today in part of the Van Loon Wildlife Area.

One of my favorite bridges was the old bridge at Wabasha, Minn, that crossed the Mississippi from Nelson, Wis. The bridge featured two 90-degree turns as you spiraled down coming down into Wabasha. It certainly wasn’t a favorite with semitruck drivers who would sometimes get hung up.

That and many other Mississippi River bridges were eventually replaced or rehabilitated, like the downstream communities of Winona and La Crosse, where two spans now cross the river. Next year a new $81 million bridge project will start across the Mississippi connecting Wisconsin to Lansing, Iowa, replacing the Blackhawn Bridge.

While most bridges that have outlived their purpose are rehabilitated or demolished, others are just sort of forgotten until they succumb to the elements. There’s a bridge near Ettrick, Wis. just off Highway 53 that was once part of a road that crossed Beaver Creek. It’s slowly sinking into the creekbed.

But other bridges still stand as road reconstruction and relocation leaves them out of the public view.

The bridge opened in 1911 – replacing the previous wooden structure – and is constructed of iron, using a pin-jointed design. That allowed for the bridge parts to be assembled on site. It was made by the Hennepin Bridge Company, a Minneapolis company started by Lawrence Johnson in 1905. Johnson – born in Germany – worked for other bridge companies before founding his own. The company was active in building bridges from Wisconsin to Montana.

It’s unclear when the Waterloo bridge was closed to vehicular traffic – probably sometime in the late 1990s. Today the approach is closed with concrete barriers but you can still walk across the asphalt base and enjoy the peaceful setting.

I’d love to hear about any old or unique bridges near you. Send me photos. Bridges connect us.

Chris Hardie spent more than 30 years as a reporter, editor and publisher. He was nominated for a Pulitzer Prize and won dozens of state and national journalism awards. He is a former president of the Wisconsin Newspaper Association. Contact him at [email protected] 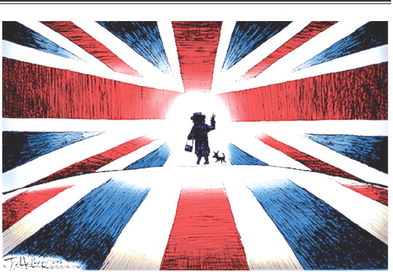