Ongoing construction is beginning to reshape the city skyline between 70th and 80th streets south. Once solely the location of a tall hill flush with trees, prairie grass, and the occasional deer or turkey crossing, 8689 Hardwood Ave. S. is now also the site of the coming Cottage Grove Apartments complex. It’s only been two months since the groundbreaking ceremony was held on July 15, but the structure is quickly rising and taking form.

While plenty of nature still surrounds the site, it claims a footprint of 8 acres of hillside land to accommodate the new 250,354 sq-foot, 171-unit apartment building. The complex will offer market-rate apartments, from studio to 3-bedroom, along with amenities like fitness rooms, a community room, and underground parking.

In the early planning stages the city, along with Excelsior-based developer Oppidan Investment Company, held neighborhood meetings to discuss and clarify any concerns residents might have with the project. Topics discussed included proposed access points, topography, and how to preserve the natural habitat and vegetation of the site as much as possible, while providing new multi-family housing for the city.

“We worked with city staff, planning, and the mayor and the council. We had some push and pull to make sure we got a development that works really well for this property and this community. We’re excited about what’s coming,” said Paul Tucci, Oppidan’s Executive VP of Development in the Midwest.

With soaring property values and subsequent rent hikes in recent years, Mayor Myron Bailey suggested that many people who want to become Cottage Grove residents are finding it increasingly difficult to make that happen.

“There’s a definite need for this type of apartment complex, and these types of living opportunities. One of our big things is lifestyle housing. We want people to be able to come here and stay here in Cottage Grove throughout their entire lives,” said Mayor Bailey.

Amcon Construction is handling architecture and general contracting, and Trilogy Real Estate Group will be in charge of building management. Construction is slated to be complete in the fall of 2023. 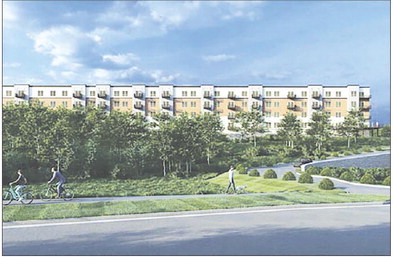 Graphic representation of the finished apartment building, as proposed. Image courtesy of the City of Cottage Grove 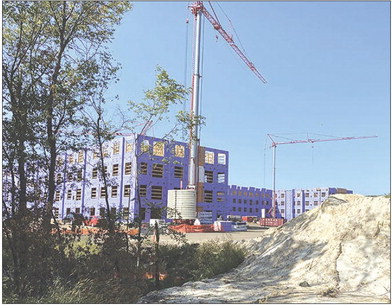 View of construction from above and southeast, on Harkness Avenue South. Photo by Dan Solovitz 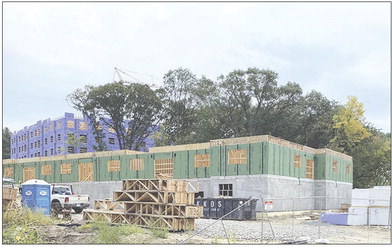 View from below, just north of the building on Hardwood Avenue South. Photo by Dan Solovitz