Teamster Local 320 shows up prior to start of contract negotiations

Contract negotiations begin soon, and this being so, the union showed up to school board.

As to the district more generally, finance director Dan Pyan gave his monthly update on finances, including how projected enrollment impacts the school budget.

“Tonight I’ll be giving our monthly financial update,” Pyan said after briefly greeting the board. “As we talk about forecasts we talk about assumptions,” he said, with the important takeaway that current assumptions drove future planning.

Including in the fund balance, representing money the district has available to meet current expenses, albeit with rules.

“The fund balance cannot fall below negative two and a half percent,” Pyan told the board. “If it goes below that the district goes into what we call statutory operating debt.” Past school board policy had been to have five to nine percent of operating expenses in the fund balance, while the current board had raised this to 16.6 percent. This essentially meant the district would have two months of operating expenditures, Pyan said, while this was based on assumptions and projections of future expenses, something not always easy.

On the enrollment side, the district had taken what Pyan called a “conservative approach with regard to projected enrollment, tracking different student cohorts and watching as they moved through teh educational system.

As it so happened, the projections showed a slight increase in enrollment of five percent over five years, or about 185 students per year. Factors in projecting enrollment take into account kindergarten and birth rates, along with post-secondary enrollment options as well as open enrollment to and from South Washington County Schools. What this means is that by 2027 the district could be looking at around 19,528 students, based on current projections. New housing was not used in the enrollment projections, Pyan said.

“I have to be conservative,” he said of the yearly budget calculations. Still, there was a takeaway: more students coming in than might be expected on local births alone. With the district tracking births in the county and comparing this to students in kindergarten five years later, the district could then calculate what it called a “capture rate,” or the percentage of students relative to the county as a whole.

With District 833 having 109,000 people at last count and Washington County having 259,000, that capture rate” of new students on a county wide level would be expected as around 42.08 percent, while it was actually higher, approaching 45 percent and more. This meant the district was gaining students over and above the expected, with many potential factors in play. Among these were open enrollment in and younger families in the district. “It could be that we have more younger families,” Pyan said as one explanation of why the number of students was higher than expected in terms of population percentage. The district gets a certain reimbursement for each student or Adjusted Pupil Unit (APU), which then plays into the budget. With each student assigned a reimbursement value according to full-time equivalent or FTE, not all were reimbursed equally. The basic formula was $6,863 per APU, with older students reimbursed at a higher amount.

Also in the yearly budget forecast, it was made known, were federal title and federal special education, fees (assumed as flat), state special education aid, and the district operating referendum. Put them all together, and it was a complicated picture, based on the best information available at present. With time came change, and changed projections. 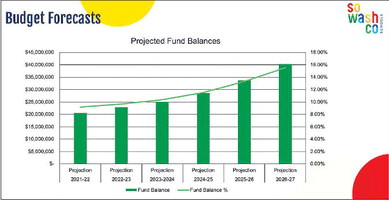 The projected fund balance for South Washington County Schools is projected to increase over the next five year, per a presentation by district finance director Dan Pyan. Chart from Sept. 22 school board presentation. 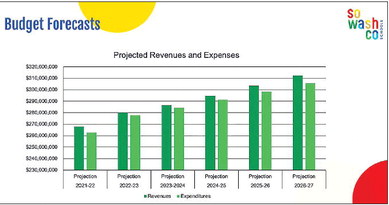 Projected revenues are due to outpace expenses for the district in the near term future. Chart from Sept. 22 school board presentation.