On the sunny morning of Saturday, Oct. 29, East Point Douglas Road in Cottage Grove was the site of the annual Monster Bash Parade. With both parade participants and attendees encouraged to dress up in Halloween costumes, the event was a fun and family-friendly way for the community to gather during this fall season.

Kicking off with a hearty police and fire department escort, the parade instantly made itself known. Plenty of candy found its way into the hands of excited kids on each side of the road, local and neighboring royalty courts waved, and music blared, especially from the festively- costumed Park High School marching band.

Awards are given out annually to five groups for their themes, costumes, and floats. For 2022’s Most Creative category, first place went to Inver Grove Heights Royalty, second place went to Hammond Royalty, and third place went to Baldwin Royalty. The Halloween Spirit Award was given to 4-H, and the Best Group category was won by Glenwood City Royalty.

With the election coming up on Nov. 8, this year’s parade included floats promoting various candidates, as well as local officials themselves marching down the street to show their support.

For 10 years, the Cottage Grove Strawberry Fest Committee has hosted the parade. An independent 501(c)(3) nonprofit organization, they rely on community support to make it a reality each year.

Parade Director Mark Halgerson said, “Our committee is all volunteers, we raise our own money to support its functions.”

Strawberry Fest President Lori Olsen added, “We reach out to the community on Facebook and our website. Some of the people that come to this parade have been coming for years. It’s community-based; it’s mostly Cottage Grove businesses that are here.”

The event was a well-attended rousing success, showing residents’ desire for people to come together and appreciate being a part of the Cottage Grove community. 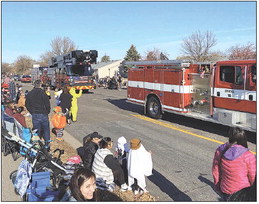 CG Fire Department trucks near the head of the parade. Photo by Dan Solovitz 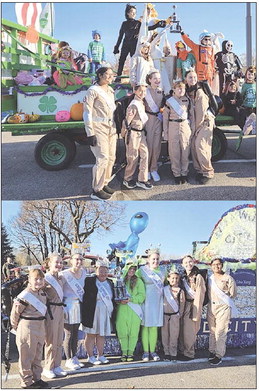