“As we talk about the levy tonight the levy is about 25 percent of our revenue,” South Washington County Schools director of finance and operations Dan Pyan said at the Dec. 15 board meeting. By the time he was done, the school board had approved a $29.8 million school tax levy, for an increase of 8.5 percent over the year previous. But while the levy has increased in percentage terms, an expanding tax based makes the individual tax bill question more complicated.

Among more concrete changes from the previous school tax levy are an increase of $1.086 million in the voter approved operating referendum for funds used on general operating expenses, overall pupil enrollment being among the factors which could impact the amount. Also up from previous is long term fa- cilities maintenance, to the tune of $3.0499 million. Long term facilities maintenance is used for deferred maintenance cost.

As to decreases, voter approved debt service had seen a decrease of $8.272 million, the funds used for debt service. The district, meanwhile, saw an increase of $1.391 million in the reduction for debt excess” category, as it was required to levy 105 percent of debt service payments in case of delinquent payments, generally less than five percent.

“You have to pay the bondsman,” Pyan said as explanation for why the district was required to levy 105 percent on debt service.

Prior to the levy approval there was a public hearing.

“State law requires us to have a public meeting between Nov. 25 and Dec. 28,” Pyan said. “To be at 6 p.m. later. It may be part of a regularly scheduled meeting, it must allow for public comment.” With final levy adoption at the meeting allowed by law so long as everything was presented, it was into more levy details.

With 83 percent of revenue for the school district’s budget in the general fund, the said fund in turn is composed of different parts local, state, and federal, the majority of revenue being from the state. The state could set a maximum allowable property tax levy, the formula for pupil-based state aid had not kept pace with inflation, Pyan said, resulting in an effective deficit of $1,263 in per-pupil state aid—and there was also special education to think about.

Special education funding was underfunded on a statewide level by $591 million, Pyan said. a figure that was only projected to rise to $806 million by 2025. That left the local district picture to think about.

“Basically our options to bridge the funding gap for special education are to cut regular program budgets or increase referendum revenue,” he said, adding, “Most districts have done both.”

Shifting to an in-depth discussion of the tax levy, Pyan said that funding wasn’t as black and white as it might seem.

The tax levy was set by voter approved referendums, while expenditure budget was limited by state set revenue formulas. The situation could arise, where a rise in local revenue could result in less from the state.

“The way property taxes work can be quite complicated,” Pyan said. Each jurisdiction sets its own tax levy based on the levy and state law,” he said. The county acted as tax collector and then redistributed total tax funds as pertaining to each of the various governments and jurisdictions affected, including county, city/township, school district, and special districts. With multiple independent governments making up the total tax bill for Washington County residents, the majority of the school tax levy is tied up in debt service, a restricted fund used to pay bonds.

“Good evening,” Dabe told the school board. “My concern is, I’ve been in this school district for 34 years. And this here, under ‘other local levies’—which we have no say in—has now gone up quite a bit,” he said. “It’s almost matches referendums. So I have great concern about this, seeing as there isn’t a discussion. I don’t know how we get that discussion, but I’m going to bring that up.” Dabe also questioned the levy as based on property value.

“Why do we base it on the property?” he asked the school board, pointing out people in different circumstances such as those with more kids or better saving practices.

“I’m retired,” he shared. “I don’t know how I’m going to be able afford to stay in this school district.”

No other members from the public spoke at the tax levy hearing.

With that board chair Sharon Van Leer asked for a motion and second, given in turn, all board members voting to approve the tax levy.

As to Dabe’s question on a discussion, we followed up on it with South Washington County Director of Communications and Community Relations Shawn Hogendorf. This is what he had to say with regard to Dabe’s concerns: Journal: A resident raised concerns Dec. 15 about having a conversation. What are some ways the district is working or intends to work on improving communication with residents?

Hogendorf: We work hard to be accessible to answer questions and have conversations with members of the public we serve in many different ways – through email and phone conversations, public comments at monthly Board meetings and public hearings, such as the one held on Dec. 15. We also share information on our website and on social media, and send out two family newsletters each month that contain important information with our school community.

As the new Director of Communications and Community Relations, I am still learning some of the means of communication we use in SoWashCo Schools. We are always looking at ways to improve how we communicate and engage with our community in a clear, efficient and cost-effective manner.

To help reach community members who do not have students in our schools, we are exploring the idea of creating quarterly print newsletters that could be mailed to all homes in our community. There is an obvious cost to bringing back print newsletters, so we are looking at different platforms and print possibilities to share information, while being good stewards of public funds. 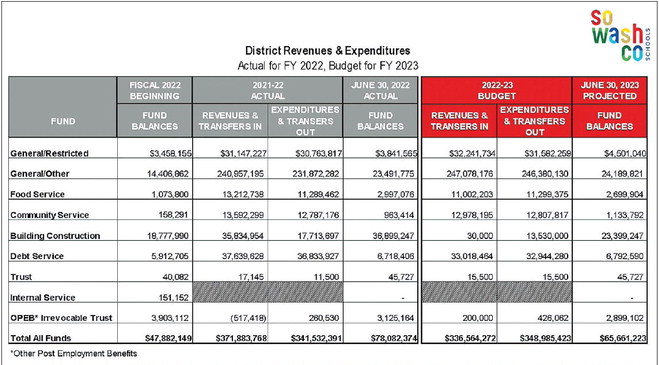 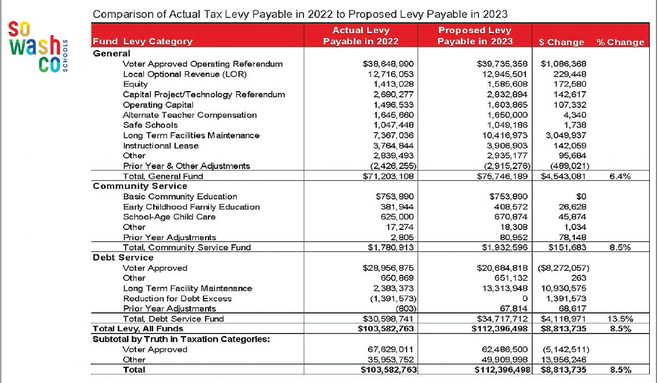 A look at the tax levy details, as shared at the Dec. 15 public hearing on the school tax levy. Image courtesy South Washington County Schools. 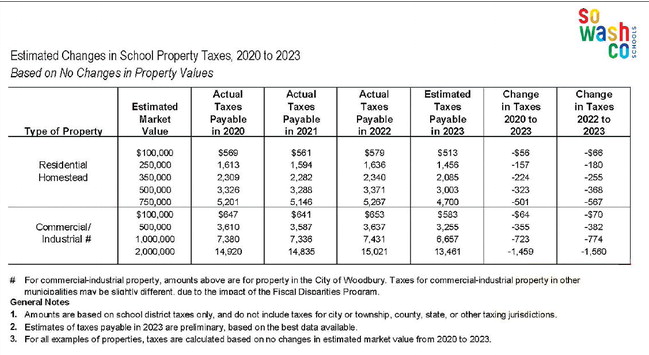