Details were presented at the Dec. 21 city council meeting, outlining the bidding process and how the cost was ultimately determined. While the new park is already in process in terms of land clearing, parking lots and sports field being installed, this bid was specifically for the new energy-efficient park building as the centerpiece.

According to construction manager Kraus-Anderson, the total amount of all bids received was $3,688.487, about 1.2% higher than their original estimate. All bids were vetted for accuracy, bid bonds, applicable insurance requirements and addendum recognition.

Councilmember Dave Thiede asked for details on recent changes in cost. Parks Director Zac Dockter and City Attorney Kori Land explained that one of the contractors had to remove their bid because they had requested a change to their bid after the numbers had already been made public. As a result, the next lowest bid was accepted, adding about $55,000 in that particular case.

Thiede asked what would happen if the council decided to reject the entire bid, citing potential lower cost of materials, as well as inflation easing some since the original estimate was created. Land suggested that the council could do that if they decided to, though recommended that they seriously consider awarding the bid as it stands.

Dockter pointed out that if the bid were rejected, the land for the park would still be used as planned, just without the planned park building or without putting together a new bid process. He said that re-bidding would take a minimum of 60 days, and that bid amounts were not likely to change much in that period of time.

Councilmember Steve Dennis made a motion to award the contracts, which was seconded by Councilmember Justin Olsen. The motion carried on a 5-0 vote.

With the construction bid awarded and the project now officially in motion, coordination and securing of materials will begin in January 2023, with a groundbreaking in May. The entire facility is expected to be completed in October 2023.

The new park building will contain approximately 2,500 square feet of space for community/class/meeting rooms, as well as a kitchen, storage area, and a public warming room. With the goal of carbon-neutral energy usage utilizing a combination of solar and geothermal heating and cooling, the project presents many challenges in design, planning and implementation.

Dockter said, “We expect that 95% of the time this will be a net-zero facility,” further adding that the plans also do include the installation of a small backup boiler that can engage as needed for quick heat recovery. 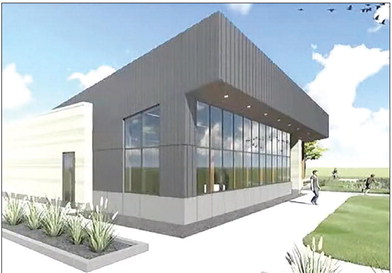