Councilmember Tony Khambata is administered his oath from Mayor Myron Bailey Jan. 4.Photo courtesy of the City of Cottage Grove
News
City and county officials sworn in for new terms

Three re-elected Cottage Grove city councilmembers were sworn in at the Jan. 4 council meeting. Dave Thiede, Tony Khambata, and Steve Dennis all received the necessary votes for re-election in November, extending their leadership on the council into a new term.

They swore an oath to the support the constitutions of the United States and the State of Minnesota, as well as to faithfully execute and discharge the duties of their positions to the best of their judgement and ability for the public of Cottage Grove over their renewed fouryear terms.

Thiede and Khambata were sworn in by Mayor Myron Bailey, and Dennis was sworn in by Washington County Sheriff Dan Starry, who himself just won a third term. Dennis thanked Starry for coming to administer his oath in person.

“I value our connection and our friendship very much,” Dennis said to Starry. He then presented Starry with a donation for the department “to be utilized to the highest and best use.”

Dennis said, “We’re blessed not only to have the Washington County Sheriff’s Department, but also our own Cottage Grove Police Department as well. The people of our city and area are in good hands.”

Khambata thanked res­idents, saying, “I’m overwhelmed to be able to state that oath for a second time. I really want to say thank you to everyone who’s put their confidence in me, and I hope I can continue to do great work for the city.”

Dennis added, “It’s an honor and a privilege to sit here and do the very best we can on behalf of as many people as we possibly can, and to do that every meeting, to try to make our home be a better place. I very much appreciate all of the support over this past campaign.”

Thiede expressed his gratitude as well, noting “support from the community and the opportunity to work with everyone and take care of things in the city.”

Councilmember Justin Olsen said, “I just want to say how pleased I am to continue working hard on behalf of the residents of this community with such an amazing team, including our new County Commissioner Karla Bigham. It’s going to be a hard year, but a fun year, and I look forward to working with all of the various stakeholders to really move this community forward in the way that our residents have become accustomed.”

Karla Bigham was sworn in the previous day, and she was in attendance to speak at the meeting. “I just wanted to say thank you. We already have some meetings on the books to get working on issues that are important to the residents, and I’m looking forward to a productive relationship,” said Bigham.

She highlighted a major focus being moving up major renovations for Park Grove Library, as well as tackling housing, transit and workforce development. 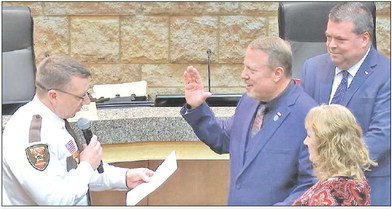 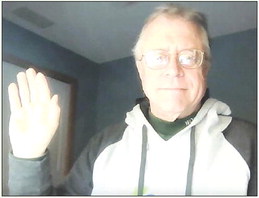 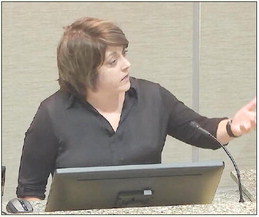