Commissioner Michelle Clasen is sworn in by Sheriff Dan Starry, and is with her daughter Teegan Tesser. Photo submitted
News
County officials take oaths of office

County Sheriff Dan Starry and County Attorney Kevin Magnuson were sworn in for four-year terms. Both were voted in in the November elections, Starry being re-elected, and Magnuson being elected to his first full term.

The board also set a meeting schedule for 2023, which includes 35 official County Board meetings, and five workshop-only board meetings. County Board meetings may be added or canceled, as necessary, with proper public notice. Meetings generally occur at 9 a.m. Tuesday in the Board Room of the Government Center at 14949 N. 62nd St. N. in Stillwater.

Contact: Yvonne Klinnert, Communications Specialist, 651-430-6026 County Board awards printing of legal notices The Country Messenger will print most of the legal notices published by Washington County during the next three years, after the County Board accepted a bid from the newspaper Jan. 3.

The Country Messenger will publish:

• first publication of the financial statement.

The second publication of the financial statement will be published by the St. Paul Pioneer Press, the only other publication that had a bid accepted.

The county is required by law to publish certain notices and information in a qualified newspaper, including a summary of board proceedings, legal notices, public hearing notices, certain bids, and certain financial publications and delinquent tax lists. To be considered a qualified newspaper, the newspaper must meet the requirements of state law.

Contact: Yvonne Klinnert, Communications Specialist, 651-430-6026 County Board approves grant agreement to assist with election security The Washington County Board of Commissioners approved a grant agreement Jan. 3 with the Office of the Secretary of State (OSS) for the 2022 Help American Vote Act (HAVA) Election Security Grant.

This grant is in the amount of $4,286 and is part of Phase 2 of the HAVA Election Security Grant. Washington County received $77,935 from Phase 1 of the grant, along with the Voting Equipment Grant of $139,992 awarded in May 2022. These grant funds, along with money provided by the American Rescue Plan Act, will be used to purchase new assistive voting devices.

Assistive voting devices are required by federal law to be available in each polling place, which allows for private and independent voting for voters with disabilities. Washington County’s assistive voting machines are 16 years old and due for replacement.

Washington County is committed to enhancing the welfare of all residents and visitors to the county. It is recognized that an activity that harms the welfare of community members is human trafficking, and its accompanying activity, sex trafficking, especially of youth. The Washington County Attorney’s Office, Sheriff’s Office, and other county staff have been working collaboratively for many years to fight this damaging crime in county communities.

To support that effort, and to recognize that human trafficking occurs in Washington County communities, the County Board recognizes January as National Human Trafficking Awareness Month.

The board’s resolution noted that the county’s East Metro Sex Trafficking Task Force in 2022 recovered 15 trafficked victims, charged four traffickers, arrested 36 people for solicitation of a minor for sex, and pursued 73 cases and tips. It also noted that one out of 50 Washington County students in grades 9 and 11 reports having traded sexual activity to receive money, food, drugs, alcohol, a place to stay, or something else.

The County Board encourages community-wide recognition of the matter of sex trafficking and the ways in which community members may combat its prevalence. 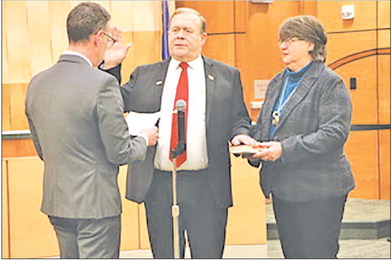 Commissioner Stan Karwoski, District 2, is sworn in with County Attorney Kevin Magnuson officiating, and is with his wife Linda. Photo submitted 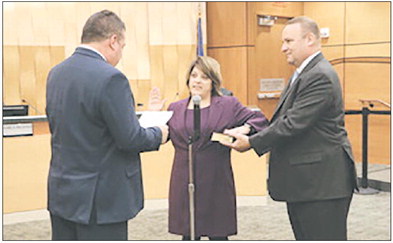 Commissioner Karla Bigham is sworn in with Cottage Grove Mayor Myron Bailey officiating, and with her is her husband John. Photo submitted 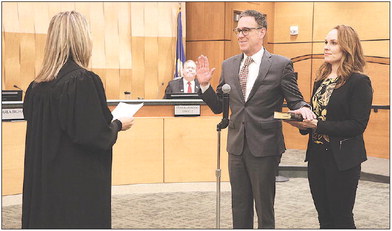 Attorney Kevin Magnuson is sworn in with Judge Siv Mjanger officiating, and is with his wife Lindsay. Photo submitted 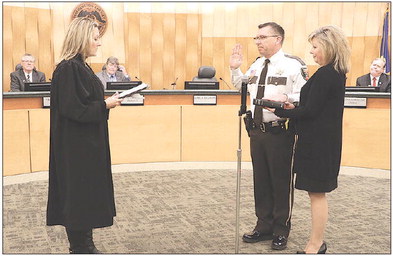 Sheriff Dan Starry is sworn in with Judge Siv Mjanger officiating, and is with his wife Jeanice. Photo submitted