The Camel’s Hump overlook from the bluff. Photo by Nerissa Solovitz
News
Rediscovering our roots – let us be explorers

It’s January in Minnesota. It’s cold. Snowy. Icy. Today, it is rainy for some reason. Perhaps drab in some people’s perspective, mine included. But I give myself no excuse in the matter of embracing the beautiful nature that surrounds us. A park or open space is meant to be enjoyed whether it be snow, sunshine or rain. Let us explore it together. Years ago, when time allowed, I would walk for miles and miles around the city of Cottage Grove discovering little parks and open spaces seemingly hidden from the view of the road – so quietly situated that I wondered if anyone ever knew they were there?

Camel’s Hump Park and Open Space is one of those places, located at 7600 Burr Oak Cove S., About 10 years ago the city of Cottage Grove partnered with Friends of the Mississippi to bring more accessibility to Camel’s Hump Park and Open Space. Together they removed buckthorn, preserved the pockets of native prairie and savanna vegetation, and provided a paved path with a cemented overlook on Camel’s Bluffs with a view not “looking: to disappoint. And it does not.

Originally it was called the Gateway North Open Space, but was affectionately known by some community members as Camel’s Hump. The bluffs speak to the nickname through their appearance.

It is winter, but upon arrival I was greeted with a sign and a snow-free wooded path. Thank you, City of Cottage Grove, for keeping it clear. For those who wonder, there is no bathroom but there is a parking lot, as well as informational signage about the nature that lives so gracefully in this park. There is a paved path to a beauti- ful panoramic overlook, and there are conveniently-located benches to rest or enjoy the beauty from a seated position.

I followed the wooded path, which extends to the right, leading me directly to the view of Highway 61, the Mississippi and the vegetation that surrounds, and the world that lives with it – that being us, our houses, our factories, our trees, our cars, and our air.

The energy was still as I exhaled the breath I did not know I was holding. It was a strange and beautiful sight – a world of technology, movement, and creation blended with an earthly body of water and land.

After the marveling was over, I realized the path had not ended. It was no longer paved, but a loose dirt path offered itself to the right. I had to go. It would be foolish not to see what a dirt path can provide when a paved one provided such beauty.

The path was thinner and closer to the edge of the bluff. I paused to look forward again and gaze upon the views. Suddenly I felt unnerved when I realized I wasn’t able to see the ground in front of me while gazing straight ahead. Feeling like vertigo was going to seize me or the fear of heights perhaps, I quickly followed the dirt path to a quaint and very welcome bench. While resting upon it, I could safely, in my mind’s eye, look forward and see another perspective to a view that still inspired awe.

It was a quieter moment. A smaller, more delicate hold of energy occurred, one that provides insight into the truth of nature. I heard the cars and trucks whizzing by. I saw the beauty of nature. I smelled the air that surrounded me. I could only think that we are separate only by the means with which we choose to separate. Sometimes that choice is only a thought.

This gem, this lovely beauty, is tucked away at the top of the world in Cottage Grove, but it is always available if or when the views from nature’s bluffs ever call to you. 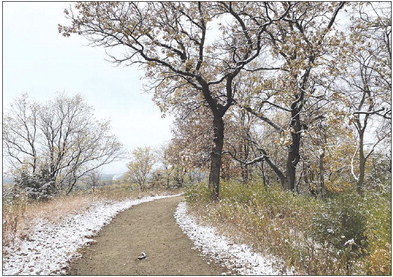 A scenic dirt path to a scenic view in Camel’s Hump Park. Photo by Nerissa Solovit 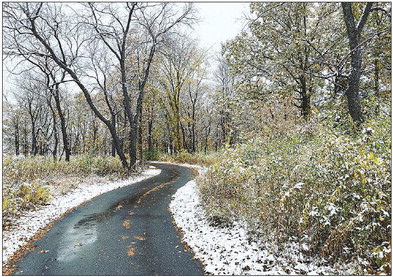 A paved path leading to the overlook in Camel’s Hump Park. Photo by Nerissa Solovit 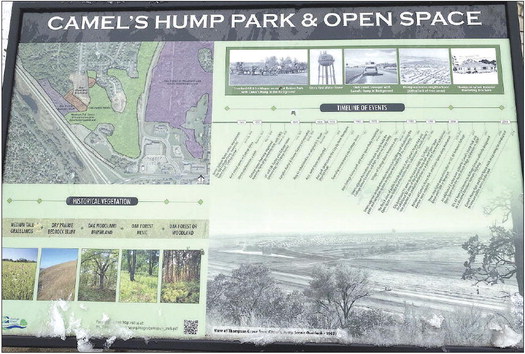