News
Long range facilities plan up for a vote August 9

It’s a $462 million question, to be decided August 9 by South Washington County voters living within Independent School District (ISD) 833. What question, you might ask?

Why the bond referendum, to fund or not to fund the long-range facilities plan as currently envisioned by South Washington County Schools, otherwise known as ISD 833.

To that end, and in the interest of an informed citizenry, the Journal has been sharing information on the long-range facilities plan with readers so that they might be prepared and informed when heading to the polls. Should the August 9 bond referendum fail to secure sufficient votes, the next chance for a plan to come before residents would be in February 2023.

This week then we continue our series from last week on elementary schools,with a look at the numbers and projects for middle and high school students in the current long-range facilities plan. The materials cited can be found under the “Resources Toolkit” at https://www. sowashco.org/facilityplanning, with an opposing view shared at www.demandabetterplan. com. With that, it’s into the middle and high school numbers!

Starting out with middle schools, anticipated needs for the next ten years include:

• Cafeteria size for the number of students

• Traffic and parking areas So how do the plans stack up to the need for middle schools?

First up is Cottage Grove Middle School. With construction of a classroom addition and secure front entry, Cottage Grove Middle School is due to see $10,131,414 for improvements from the referendum, based on cost estimates submitted to the state. With a current capacity of 1,208 and a proposed capacity of 1,390 for student population, the 10-year projection is for 1,182 students, or 85 percent of proposed capacity, as opposed to 97 percent capacity in 10 years if nothing is done.

Following on Cottage Grove is Lake Middle School. With a classroom addition, pool bleachers, and a secure front entry in plans for Lake if the bond referendum passes, improvements are estimated to cost $11,101,267.

As to student numbers at Lake, they currently stand at 1,188, projected to become 1,370 in 10 years. With a projected 10-year growth of the student population to 1,281 students, an addition will put Lake at 93.5 percent capacity in 10 years, as opposed to 93 students over if left at its present capacity, based on district projections.

Moving from Lake to Oltman Middle School, construction of a classroom addition and cafeteria expansion are planned if the referendum passes. Projected to cost $25,229,164 of the $462 million total bond, Oltman will see a sizable addition, with capacity increased to 1,385 students from a current capacity of 990. With 1,312 students projected for Oltman in 10 years, the addition will put the middle school at 95 percent capacity, as opposed to overflowing if nothing is done based on current district projections.

Closing out the middle school report with Woodbury, the August 9 bond referendum calls for $12,273,995 in improvements, with capacity raised from 1,188 students to 1,398 for the 10-year plan, putting Woodbury Middle at 96 percent capacity after accounting for a projected student increase to 1,344 over the same time period.

So what about the high schools?

As to East Ridge, the improvements proposed in the August 9 bond referendum, are as follows:

• Construction of a new classroom addition

• Creation of a Flexible Multipurpose Online Learning Space, and

• Bus lot revisions to accommodate additions All told, the estimated price tag for the above at East Ridge is $45,309,965. Two schools covered and two to go.

Shifting to Park high, the long-range facilities plan calls for the following improvements, at an overall estimated price tag of $49,497,432:

• Expansion and renovation of Biomed, CTE. STEM and Robotics spaces

• Creation of a flexible Multipurpose Online Learning Space, and

Last but not least on our review of the details in the August 9 bond referendum, is Woodbury High.

Planned for Woodbury High if the $462 million bond referendum passes and estimated to cost a combined total of $50,086,634, are the following:

• Construction of a new cafeteria and kitchen

• Construction of a new secure entry and administration area

• Construction of a new classroom addition

• Expansion and renovation of Biomed, CTE, STEM and Robotics Spaces

• Redesign of Complete Site Plan, Parking Lot and Service Roads With elementary projected to cost $194,914,223, plus the middle and high school together projected to come out at $218,349,906, the final $47.54 million of the proposed $462 million overall bond referendum will be covered next week, relating in part to support services and land purchase for further expansion, along with the conversion of Central Park at Woodbury to house SoWash-Co Online.

Pictured below are the prospective project footprints for each of the middle and high school projects up for funding in the August 9 bond referendum. Red represents new construction, pink represents future construction, gray the asphalt and concrete, green athletic and green space construction, blue stormwater pond construction, and yellow playground relocation. All images are from the district’s submission to the Minnesota Department of Education. 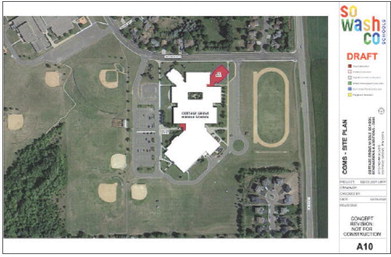 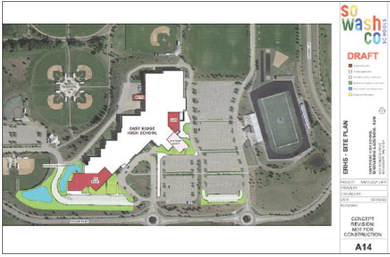 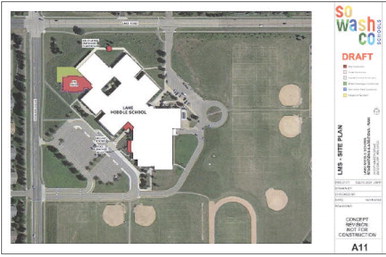 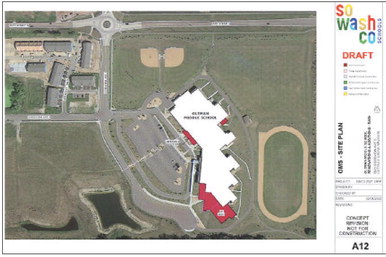 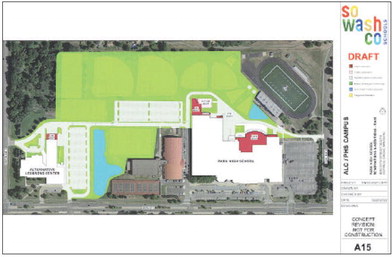 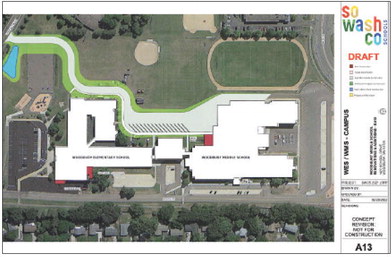 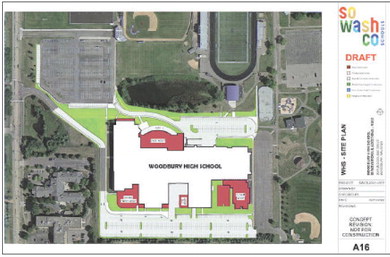 Latest News
News
Decision day approaches with August 9 bond referendum
By Joseph Back It’s a day long in the making. On Tuesday August 9, South Washington County voters will decide whether to fund or not fund the dist...
News
CG implements 12-month CBD sales moratorium
CG implements 12-month CBD sales moratorium By Dan Solovitz While Minnesota has entered the national stage of legal THC, the Cottage Grove Cit...
News
Two candidates, one ballot spot
By Bruce Karnick [email protected] Every 10 years, the Minnesota Legislative districts are re-drawn, creating shifts in both the partie...
News
SPELLING BEE Time
SPELLING BEE Time BY BEA WESTERBERG New location “Life is either a daring adventure or nothing”. Helen Keller That is a fact check for me...
News
SLICES Of Life
SLICES Of Life BY JILL PERTLER Phone connections - Part 1 of 2 If the fire alarm went off in your home or workplace and you had to evacuate...
Obituaries
Obituaries
OBITUARIES
Obituaries
OBITUARIES
Obituaries
Warren Quade 1940-2021
Warren Harold Quade of Prescott Wisconsin passed away on November 6th, 2021 at the age of 80. Warren will be deeply missed by his family and friends. ...
Obituaries
OBITUARIES
Kent Petrie 1947-2021 US ARMY VETERAN Kent Richard. Petrie, age 74, af Callage drove,, passed sway peacefully on Sunday, August 15, 2021. K...
Obituaries
Obituaries
Loren Hagness 1941-2021 Loam Hipoa, age iHj at' Cottage Grove died unexpectedly on June 30, 2021. Loren Arthur Hagness was hum Janu...
Read Our e-Edition