A three-judge panel has dismissed a lawsuit against the City and Pulte Homes by Friends of Grey Cloud, which sought to force an Environmental Impact Statement prior to construction at the former Mississippi Dunes golf course. Submitted photo.
News
Court dismisses lawsuit against city, developer on procedural grounds

Among the reasons the Cottage Grove City Council approved new development at Mississippi Dunes as such, was fear of a lawsuit.

It just so turns out the city was facing a lawsuit until just recently—but not for money, nor from the landowner or developer.

Instead, a conservation group called ‘Friends of Grey Cloud’ made up of both local and area residents, had sought through court appeal to force the City to do a further environmental review on the site, located just off the Mississippi River. That lawsuit is now dismissed, per City Administrator Jennifer Levitt.

“The Court dismissed the case,” she related by email. Court order A22-0358 from a three judge panel with the office of Appellate Courts indicates that the group as represented by three “relators” (two of whom are city residents and a third from Grey Cloud Island township), failed to properly serve Pulte Homes until six months after the City had approved Resolution 2022-015 regarding Environmental Assessment of the property, and that the court in turn lacked authority to extend the time period for service, which expired on or before March 17, 2022.

As such, the court has dismissed the appeal and stricken oral argument of the matter from the October 5, 2022 court calendar, when the appeal was originally slated for oral argument. The property was still listed to private holding company Dunes LLC along with TCB Properties LLC as of last week on Washington County GIS. The two companies belong to the private landowner selling to Pulte Homes for the development.

As for the group that brought the lawsuit against the City and Pulte, it had the following to say through consulting lawyer Jason Juran.

“We’re very disappointed the Court decided not to reach the merits of our claim due to a service technicality, and that the land and wildlife remain exposed to and threatened by outside development interests,” he said. “We are certainly evaluating every avenue for relief and will continue the fight.”

In the meantime, and as the fifth amendment to the U.S. Constitution ensures fair market value to private landowners in exchange for land, a Go Fund Me fundraiser entitled “Friends of Grey Cloud – Protect more Parkland” by the group with Facebook presence seeks to raise funds for protecting more land.

Attempts to reach Pulte Homes for comment were not answered prior to press time. 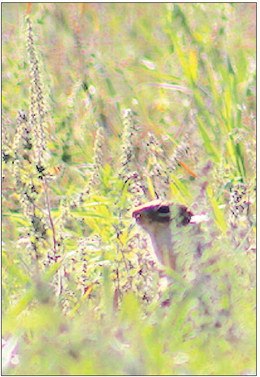 Once mistaken for a native gopher by an artist tasked with drawing one for the University of Minnesota back in the 1940s, this thirteen-lined ground squirrel recently braved the hawk’s eye to get a look around off 103rd Street in southwest Cottage Grove. The land to the back is zoned medium density residential.Photo by Joseph Back.